ToolGuyd > Power Tools > Power Tool Accessories > Irwin Unibit Step Drill Bits are Now Made in China?
If you buy something through our links, ToolGuyd might earn an affiliate commission. 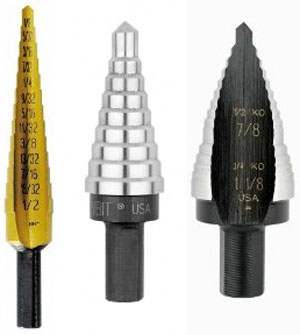 Irwin Unibit step drill bits have always been a personal favorite of mine. Sure, they cost more than some other step bits you could buy, but they deliver consistent performance and are made in the USA.

Correction – they were made in the USA.

If you recall, Stanley Black & Decker acquired Irwin (and their Unibit brand) from Newell Rubbermaid back in 2016.

Step drill bits are specially designed multi-sized drill bits, and their “steps” allow you to cut progressively larger holes in thin materials, typically sheet metal, during a single operation. Basically, it drills a series of larger and larger holes until you reach your desired hole size. 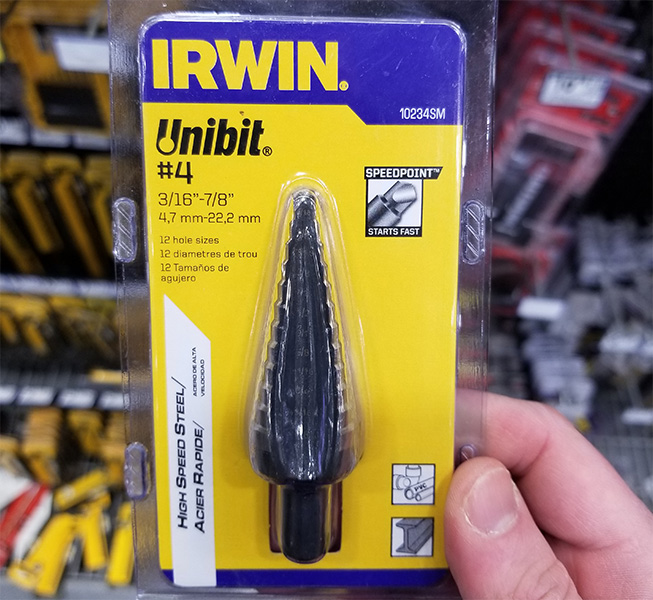 I visited a Lowes store today, to see if they had any of the new Dewalt 12V Max Xtreme Subcompact cordless power tools in stock (they don’t), and took a walk through the tool aisle.

On a whim, I picked up an Irwin Unibit drill bit, size no. 4, and checked the back of its packaging. 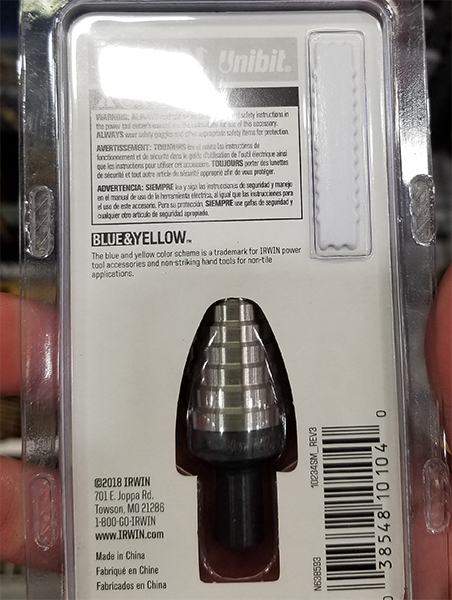 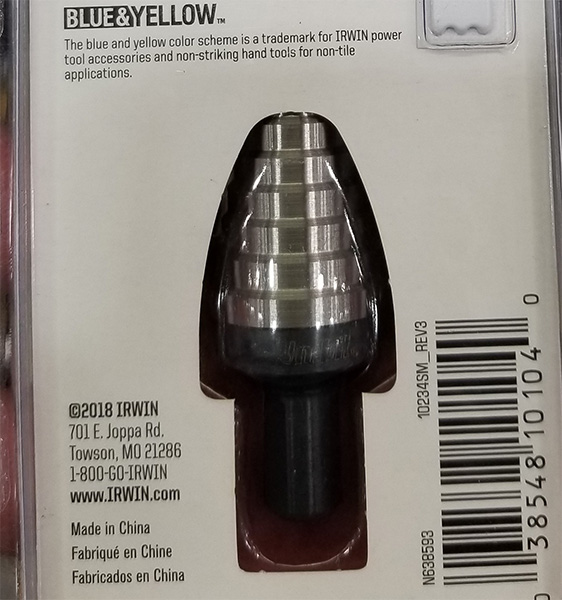 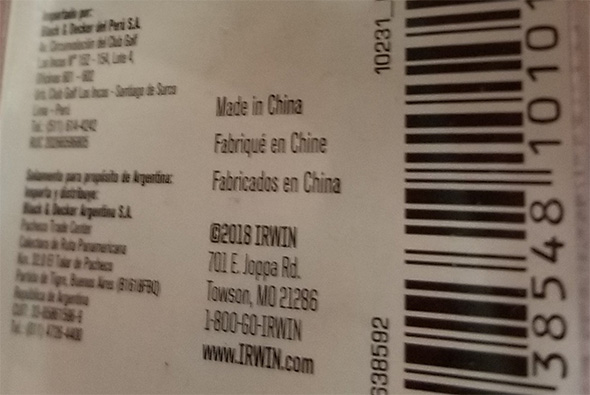 I checked another size. Made in China.

I checked all of the individual sizes, and they were all marked the same.

There was also three 3-packs, and they were marked Made in USA. 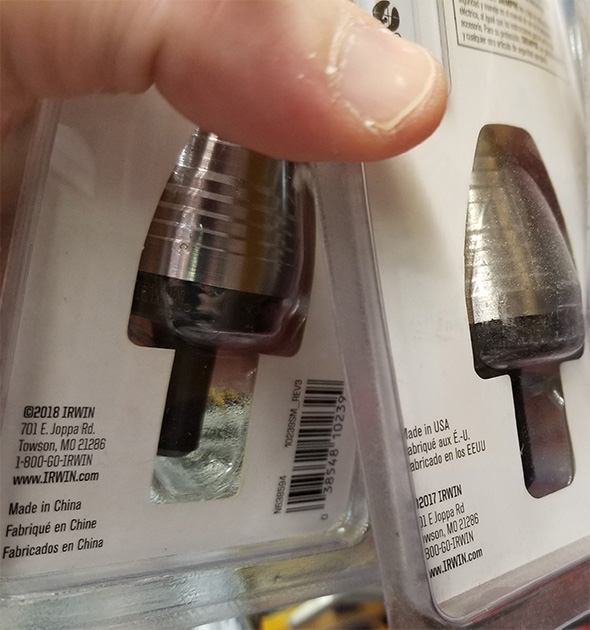 If this is indicative of a widespread change, and not a limited fluke occurrence of some kind, well that’s just disappointed. I was pretty bummed out about this at the store. Maybe it’s just some SKUs? SKUs at some stores? Maybe… maybe this… I’m sorry, I’m out of ideas.

The simplest possible explanation is that Stanley Black & Decker moved production overseas. It’s possible that they were compelled to, such as if the production facility was not included in their purchase of Irwin and Lenox brands from Rubbermaid.

Whatever the reason, even if the sourcing change was perhaps unavoidable, it’s still disappointing to see.

There is an important question to ask, and that’s whether it matters where these Irwin Unibit step drill bits are made. To me, yes. There are very many far less expensive step drill bits that are made overseas, such as by Neiko, a popular brand sold at Amazon (and perhaps elsewhere, but that’s the only place I see them).

I don’t use step drill bits daily, but I do use them fairly regularly. I use step drills enough that I want consistent quality and high performance, but not often enough where I need to be very conscious about pricing. So, I tend to spend a little more on Irwin Unibit bits, and I do so assured of a positive experience similar to past experiences with the same or other sizes of Unibit step drills. That they were made here and helped support domestic jobs added further justification to the higher price, even though so many people have been vouching for less expensive and lesser-known brands.

Dewalt offers impact-rated step drill bits. Perhaps production of these Irwin bits are being done at the same place?

I find myself thinking that Stanley Black & Decker must have taken precautions to preserve Irwin Unibit drill bit quality. Surely, even if users don’t notice the updated country of origin information, they’ll notice if the bits don’t cut as fast or don’t last quite as long.

So, performance-wise, it might not matter. Or maybe it does. Even with similar equipment, resultant products don’t always turn out identical.

The fact of the matter is that there are too many unknowns. We simply don’t have any insights into why this change was made.

There are only two things I know for certain. 1) The Irwin Unibit drill bits at my closest Lowes store are marked as being made in China. 2) That bums me out.

I might seek out more answers, but I’m not sure this is something I’ll feel better about.

Let’s say there is a bakery and they’re well-known all around for their chocolate cakes. They’ve baked those cakes for years, and they’ve gotten very good at it. You can take their recipe and send it to a different bakery, one that makes all kinds of baked goods, but very often, the new product just won’t taste the same. Something gets lost along the way. Maybe the cocoa is different. NYC is known for thin-crust pizza and its bagels, two types of foods that don’t quite taste the same anywhere else. It’s widely believed that the difference is in the water. You have the same oven, the same ingredients, the same recipe, but still things will be different.

I don’t like changes. There is also the question about why production was moved? Product production is typically moved to other countries to lower costs. If or when that is the reason, the next question is whether other or additional measures are taken to lower costs. When that happens, the “recipe” can change in a way where appearances might remain the same but the user experience changes. The uncertainty in all that adds to my frustrations.

Is This Dewalt Cut-Off Wheel Still Good? Answer: No, it Expired