ToolGuyd > Hand Tools > Sockets & Drive Tools > Kobalt Pro90 Ratchets
If you buy something through our links, ToolGuyd might earn an affiliate commission.

What’s the benefit of 90-tooth gearing? When compared to ratchets with coarser gearing, finer tooth (or position) ratchets can be swung in tighter spaces. 90 teeth means that you can turn a wrench with as little a swing arc as 4°.

Say that you have a 36 tooth ratchet. That means that you need at least 10 degrees of swing to turn the fastener.

Have you ever work in too tight a space to turn a standard combination wrench? That’s the same idea. 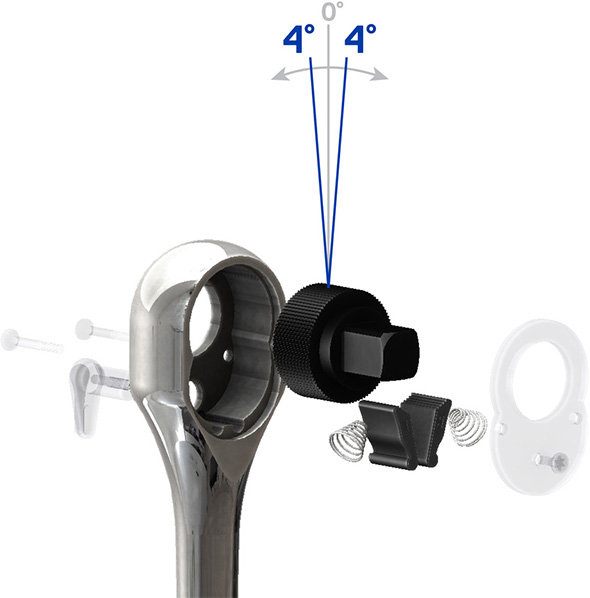 I feel a little snooty for saying this, but you’re not going to get great ratchets for $30. However, fine tooth ratchets have gotten me out of tight situations – literally and figuratively. These look like they could be an upgrade over basic ratchets that might come in inexpensive socket sets.

It’s tough to judge ratchets from a few marketing words and some product images. If you’ve used these before, or the previous ratchets that these have been said to upgrade, please let us know what you think about them!

Also, there seems to be some big discrepancy. Looking at the product images the Kobalt Pro90 ratchets don’t look the same as Kobalt’s standard quick release ratchets.

The group of Kobalt Pro90 ratchets shows a smooth back of the ratchet head. The parts diagram and this other image that shows the swing arc, they show 2 fasteners going through the back of the head.

Kobalt’s other quick release ratchets are quite pricey. For example, the 1/2″ ratchet by itself is $30. The description for that one mentions a fine 90-tooth design.

The different look of these Kobalt Pro90 prices probably helps explain things. You’re not getting upgraded versions of the standard ratchet for $30, you’re getting a set that was designed around the $30 price point.

Confusing things further, there is another style of Kobalt ratchets, with a smooth-faced head, but it’s slimmer than the other standard ratchet design and has 72-tooth gearing.  These “mini-head” ratchets only seem to be available online and not in stores.

I’ve managed to confused myself, and the nearest Lowes is too far away for me to casually drop by to see if the open stock ratchets display can clear things up.

The bottom line is this – Kobalt has come out with a new 3pc ratchet set, with 90-tooth gearing, and it’s priced at $30. There are too many unknowns for me to be able to guess much more about it. If you’re interested in the new ratchet set, you’ll probably want to check them out in-store rather than online, in case there are any “gotchas.” The price is… uncharacteristic for what I would expect from an “upgrade.”

Lowes and Kobalt describe this wrench as “new, improved, precise,” but I cannot shake “and cheap” out of my mind. If the set was priced at $50 or $60, would I have the same doubts? Would you? Maybe I’ll just have to add this to my holiday season “tools to test” shopping list.