I’m going to talk about the 12V-class model first, because of its elegant design and compact size. Although I believe there are more users interested in 18V-class LED lighting products than 12V-class ones, there’s always something especially appealing about worklights that can be stored or carried nearly anywhere.

The new ML102 can be used as a flashlight, with directional illumination, or as a lantern that provides a more spread out lighting pattern. You can switch from one mode to the other using a selector knob.

It took me a moment to realize how Makita engineered the ML102’s selector knob. At first I considered that the knob switched between two sets of LEDs, but that doesn’t seem to be the case. In the flashlight mode, the LED array is aiming out the front of the tool. In lantern mode, the LED array is rotated around and then aimes into the tool, towards a conical reflector.

That’s pretty neat, and probably makes the 7-1/8″ Makita ML102 LED worklight fairly compact. It weighs just less than a pounm and that’s with an attached battery.

It’s got a hanging hook at the top, which can also serve as a carrying handle, and a smaller hanging hook on the bottom. 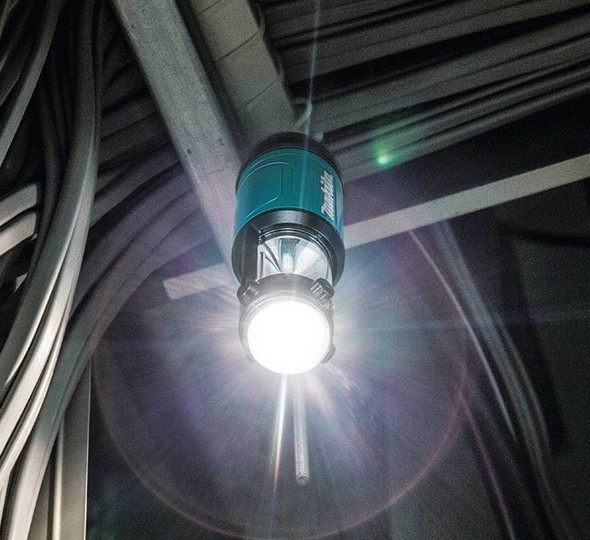 You might also be pleased to know that the ML102 flashlight lantern is dust and “drip-proof,” with an IP54 rating. That’s a pretty decent level of waterproofness.

Light output is about 100 lumens, and runtime is 8 hours when paired with a 12V Max 1.3Ah Li-ion battery pack.

Price: $35 via Amazon, battery and charger are NOT included. 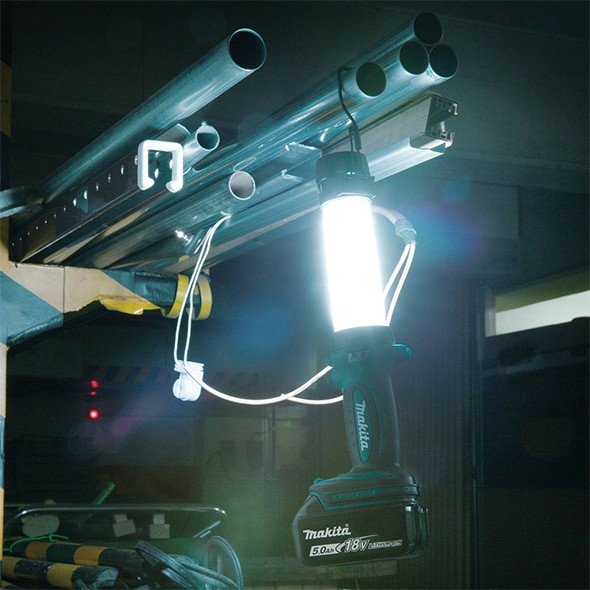 The 18V DML806 is designed a little differently than Makita’s 12V-class model, but is perhaps more functional. It features 3 lighting modes – 360° lantern, 180° lantern, and flashlight mode.

Runtime is up to 21 hours in 180° lantern mode when paired with a 5Ah battery pack, or 51 hours when in flashlight mode. There is of course the obligatory metal hook for hands-free illumination.

Price: $73 on Amazon, battery and charger are NOT included 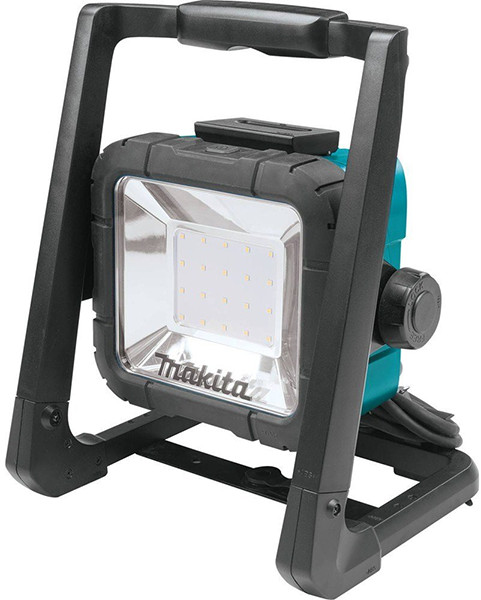 Here’s the big guy, a powerful new flood light that can be powered by a Makita 18V Li-ion battery pack or the built-in power cord. Additional features include a pivoting head, so that you can aim the light exactly where you need it – with full 360° vertical rotation! – and a standard 1/4″-20 tripod mount.

Makita offers a couple of different accessories, with might not be available in the USA, such as a tripod mount that can support up to 2 of these lights, a vise mount that can be used to mount the DML806 to scaffolding, pipes, or other structures, and an anti-glare film.

I can’t find any information about how long the AC power cord is. Any guesses? I’m hoping it’s maybe a 10 or 12 foot cord.

Price: $134 at Amazon, battery and charger are NOT included

To be completely honest, I am much more excited about the new 12V Max waterproof and dual-mode ML102 than either of the 18V models. Although, I can’t argue about the obvious benefits of the DML806’s longer runtime, or the DML805’s AC/DC power source flexibility.

I can’t say I had ever paid close attention to Makita’s LED lighting products before, at least not as much as with Dewalt, Milwaukee, and Bosch, but these look like great new offerings.

The 18V flashlight lantern looks a little long, and the 18V/AC flood light looks both sturdy and clunky. I wish that Makita designed the larger worklight so that it could be removed from its carrying handle and pivot mount, but that doesn’t seem to be the case.

Whether you’re a Makita user or not, what do you think of these 3 new LED lighting options?