ToolGuyd > Editorial > How Big is Makita’s Cordless Power Tools and Accessories Business in North America?
If you buy something through our links, ToolGuyd might earn an affiliate commission. 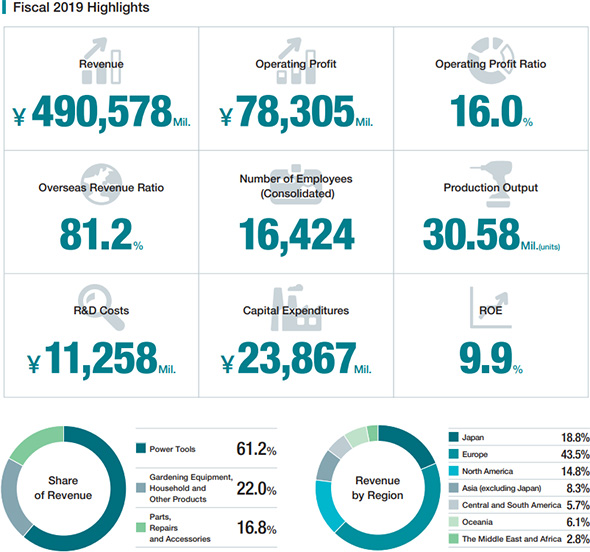 Looking at Makita Tool’s 2019 annual report (PDF), I was surprised to find that only 14.8% of their sales revenue is from North America.

Tool and accessory sales here amounts to less than 15% of their total revenue. I knew that North America was a minor contribution to their worldwide sales revenue, but less than 15%?

In comparison, sales revenue in Japan, where Makita is headquarters, was 18.8%. Their revenue from Europe was 43.5%, nearly 3X the amount earned from North American sales.

$4.608 billion in total revenue, x 14.8% = ~$682 million in revenue from the United States, Canada, and Mexico. That’s quite a few cordless power tools and accessories.

In comparison, Stanley Black & Decker earns 55% of their total revenue from the United States, and a 60% share of their tools and storage revenue (Source: Investor Presentation July 2019). TTI earns 76.5% of their sales revenue from North America (Source: TTI 2018 Annual Report Financials).

What I find interesting is that Makita is a smaller company than both Stanley Black & Decker and TTI, and far less diversified, but still earn billions of dollars in annual revenue. Keep in mind that TTI’s figures include brands such as Milwaukee, and also Ryobi and Ridgid power tool efforts at Home Depot (in North America), and that Stanley Black & Decker’s brands include Dewalt, Mac Tools, Stanley, and many other big names.

Makita’s revenue contribution from sales in the United States and North America are small compared to their worldwide figures, and are roughly an order of magnitude lower that what Stanley Black & Decker and TTI earn here.

Unfortunately, it’s impossible to know how Makita tool sales compare to the performance of Dewalt and Milwaukee brands individually, since their corporate parents don’t release such data.