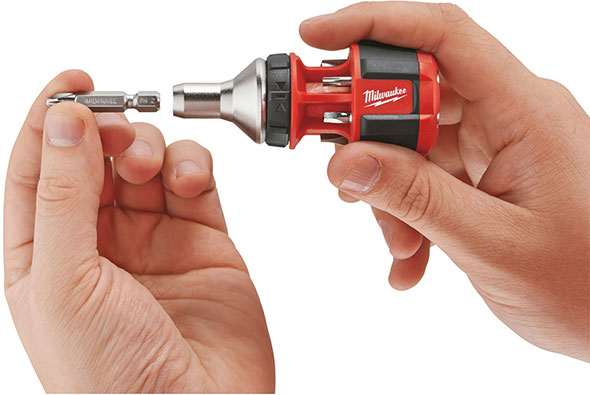 The new stubby screwdriver features a 3-way ratcheting mechanism that can be set to work in either direction, and setting the switch to the center position locks the mechanism in place for manual use. 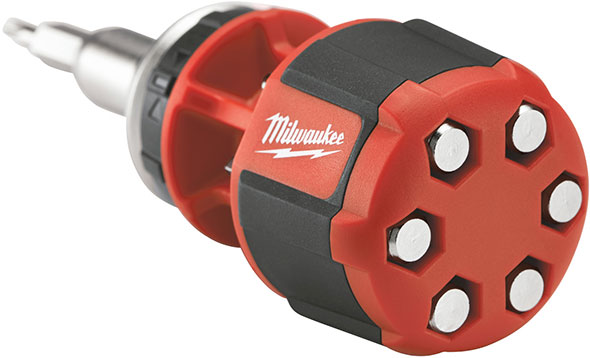 If you’re thinking you can use this with standard bits, you can, but the built-in bit storage only works with 1.5″ bits. 1.5″ screwdriver bits are available via industrial suppliers, although it might be tough to find direct replacements for these chrome-plated bits.

As an aside, I measured these bits after recording the video that’s embedded below. It wasn’t until the third take with the video that I realized these weren’t 2″ power bits and that they were in fact mid-way between 1″ and 2″ bits. I didn’t whip out the ruler until afterwards.

As with other stubby screwdrivers, Milwaukee’s is designed to be used in tight spaces where full-size drivers are often too long to fit.

I have only used this driver a couple of times, but thus far it seems comfortable to use, and the ratcheting mechanism seems pretty strong. It’s not as fine-toothed as I prefer, but keep in mind that this is a $15 screwdriver. At least it’s not as coarse and clacky as other inexpensive ratcheting screwdrivers.

Milwaukee’s multi-bit driver is larger than other stubby screwdrivers and bit holders I have (this is shown in the video), but that’s not necessarily a bad thing. The extra handle width allows for extra torque delivery, and it provides space for the built-in bit storage.

Overall, I think this is a great new addition to Milwaukee’s hand tool lineup. I use stubby screwdrivers fairly regularly, but not for long marathon driving sessions. The PB Swiss Tools stubby screwdriver bit holder I reviewed is enough for my needs, but the Milwaukee screwdriver’s $15 price tag makes it a hard alternative to resist.

Thank you to Milwaukee Tool for providing the review sample unconditionally. Review samples are typically given away, donated, or retained for editorial and comparison purposes.