ToolGuyd > Power Tools > Cordless > One of the Design Philosophies Behind Milwaukee M12 Cordless Power Tools
If you buy something through our links, ToolGuyd might earn an affiliate commission. 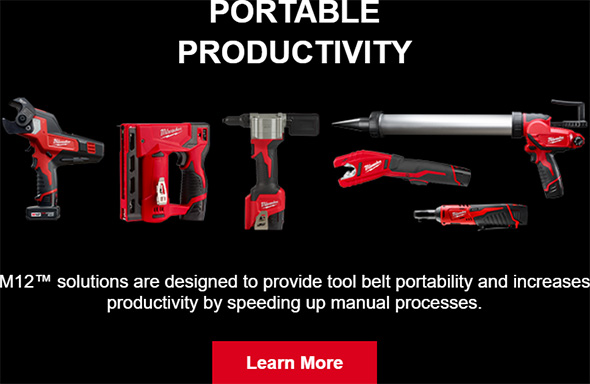 I just received a new Milwaukee newsletter that they sent out to consumers, and it perfectly sums up the modern general philosophy behind their M12 cordless power tool lineup.

Our M12 Cordless System is the largest sub-compact system on the market, delivering industry-leading durability and power in a size that outperforms the competition in the tightest places.

This might be their typical marketing language, but perhaps Milwaukee is throwing some jabs at Dewalt. Dewalt is Milwaukee’s top competitor and has now come out with new 12V Xtreme sub-compact cordless power tool offerings.

But to bring up the focus of the post, this is what Milwaukee says about their M12 cordless power tool system:

M12 cordless power tools are aimed at increasing productivity by “speeding up manual processes.” In other words, by doing the jobs of hand tools, either faster, easier, or with less effort.

This is the motivation behind their M12 stapler, their rivet tool, and other such offerings. Tools such as their new M12 Fuel cordless torque wrench seem to be born with the same motivation and design goals.

There are of course cordless tools, such as Milwaukee’s M12 rotary hammer, which are intended as compact and even one-handed versions of full-sized M18 cordless power tools.

It’s important to know what’s going on behind the scenes, or to at least know and understand the why behind what a cordless power tool brand might be working on, because it makes it easier to think about what could be coming next.

Nobody wants to buy into a dead-end cordless power tool system. Sorry, let me rephrase that. Most cordless power tool users don’t want to buy into a dead-end system. Some beginners, homeowners, or maybe even apprentices, might buy a limited assortment of tools, or maybe even just one solution or gateway tool, but most will have their sights set on the next purchase even if it’s way down the road.

With Milwaukee, their M12 cordless power tools seem to be driven by three goals.

1. To strive towards a cordless jobsite.

Milwaukee has put a great deal of effort into creating M12 cordless power tools that take the place of corded and air-powered tools.

1A. To improve upon existing M12 tools or create new compact versions of M18 tools.

Every so often, M12 and M12 Fuel drills and drivers are improved upon in some way. Tools like the new M12 Surge driver bring the functionality and features of M18 tools, but in a smaller, lighter, and less fatiguing package.

Sometimes M12 just makes more sense over M18. For example, Milwaukee’s cordless ratchets are a part of their M12 system. Sure, they certainly could have made them into M18 power tools, but the M12 form factor simply makes better sense.

2. To speed up manual processes.

Understand this, and a lot of their tools make more sense.

What kinds of tools do you wish Milwaukee added to their M12 cordless power tool system?

Do you think there are other design philosophies behind Milwaukee’s M12 system?