ToolGuyd > Power Tools > Cordless > New Milwaukee M12 Cordless Soldering Iron
If you buy something through our links, ToolGuyd might earn an affiliate commission.

To compliment the announcement of their M18 Compact Heat Gun, Milwaukee also showed us their new M12 cordless soldering iron. Anybody that does electrical work knows the two tools go together like peanut butter and jelly.

The most common use case for a soldering iron is probably repairing wires, whether it be under the dash of a truck, in a control panel, or deep inside some equipment. That’s where the duo of heat gun and soldering iron come together — you join the wire with solder then insulate the connection with heat shrink tubing.

Stuart’s Note: When I asked about who this was aimed at, Milwaukee’s product manager mentioned the potential for field work, and for other jobs where a corded solution isn’t ideal, such as when working with automotive wire harnesses and doing things like car speaker or accessory installs.

Other uses include connecting and removing wires and other components on a circuit board, or crafts such as making jewelry or stained glass. It remains to be seen if this M12 soldering iron has enough power for the latter. One task you won’t be doing with an iron like this is soldering copper pipes — leave that to the torches. 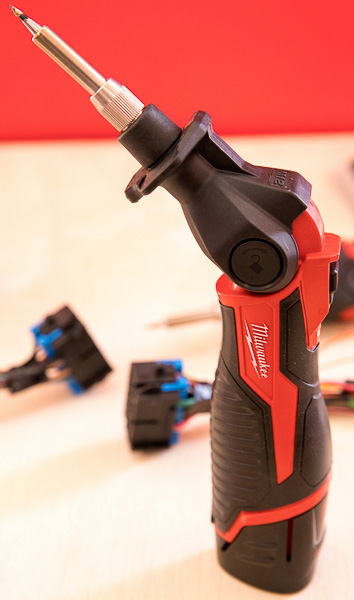 Here’s a quick look at the specs we know so far:

Milwaukee says this soldering iron monitors the temperature of the tip — a feature of better and usually more expensive irons. By monitoring the temperature, the iron can tell you when it’s ready to use, provide more power to the tip so it doesn’t get too cold to melt solder on larger work, and prevent the tip from overheating and damaging itself or what you’re soldering. 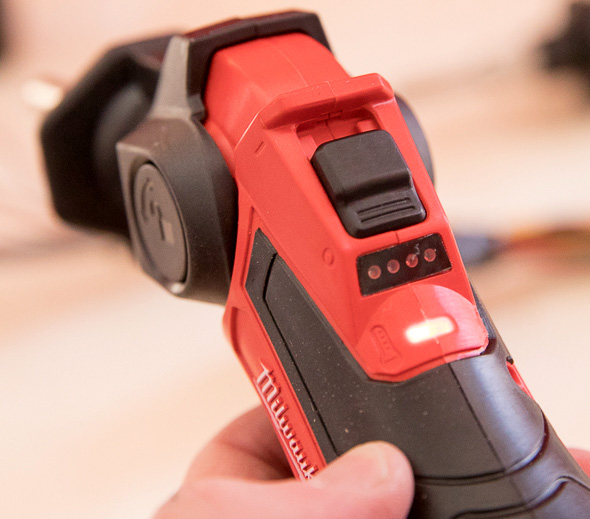 When you turn the iron on, the status LED blinks green to indicate the tool is heating up. When the tool reaches soldering temperature (450°F) after about 20 seconds, the light turns solid green. The tip will continue increasing in temperature until it reaches 750°F. When you turn the iron off, the LED the light will remain red until the tip cools down, at which point the LED turns off.

The soldering iron has a pivoting head which can be adjusted to three different positions with the push of the button on the side. You can rotate the head to a right angle, 45°, or straight to make it easier to get into tight spaces.

When Stuart talked to the product manager he was told the bare tool will come with both a conical and chisel tip and sell for $80 or less. There’s no information about a kit yet.

*Thank you to David Frane for contributing photos to this post.

Let’s start out by talking about a few things Stuart and I worked out from what we were told. Stuart was told that the M12 soldering iron had a 18-30 second heat up time. I was told that the green light turns solid and the iron is ready to use after the tip reaches 450°F, and that is after approximately 20 seconds. We are speculating that the 30 second heat up time is how long the iron takes to get up to its max temperature of  750°F. Or that could be how long it takes to heat up to 450°F when the battery is running low.

We were only shown the conical tip. Stuart was told that the chisel tip design is being finalized — I really hope they come out with more than one chisel tip, but I’m not holding my breath. They most likely will compromise on a medium sized chisel tip, because this soldering iron is really targeted at the guy in the field who needs to get the job done, not a technician at a bench who can often choose from a wide array of tips. 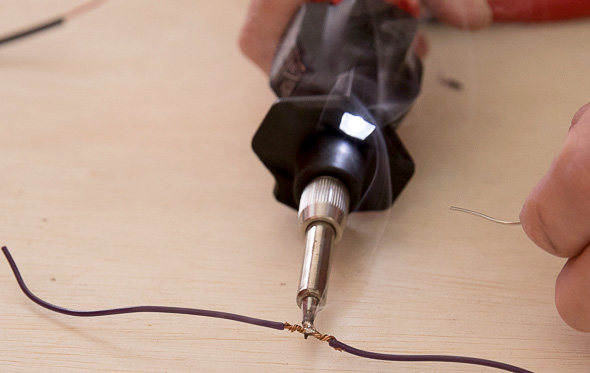 I mentioned in the intro that when doing electrical work, most notably if it involves wiring, you’ll often use a heat gun and soldering iron together. So why then did Milwaukee make the heat gun M18 and the soldering iron M12? First off they told us that 60% of their customers use both M12 and M18 tools together. The real reason is more of a matter of function. The M12 platform just doesn’t have enough power to run a heat gun and the M18 platform is too large for a more delicate tool like a soldering iron.

If you are at a desk or somewhere near an outlet, a corded soldering iron with a good choice of tips is more than likely going to be your go-to tool. If you need to get out in the field away from AC power, previously your best choice was a butane powered soldering iron — which has its own issues.

Stuart’s Note: Cordless battery-powered soldering irons have historically sucked. I ordered a Hakko that I posted about previously, but haven’t tested it very thoroughly yet. When I need to do some quick soldering, I’m more inclined to reach for a corded soldering station. This new Milwaukee M12 soldering iron holds a lot of potential. If it sounds like Ben and I are excited about it and its potential, it’s because we very much are.

Even when you are near an outlet, corded soldering irons have their own problems: the cord gets in the way and you need a safe place to put it down. With Milwaukee’s M12 cordless soldering iron, you have neither of these problems. Obviously there’s no cord to snag or have to deal with, and the iron can be placed down on its side or standing up on its battery.

When you are away from power, the only real solution has been a butane soldering iron. You have to buy butane, which in some places can be a pain, you have to light it, which isn’t always easy, and they exhaust hot fumes. We are optimistically looking forward to the M12 cordless soldering iron as a potential replacement.