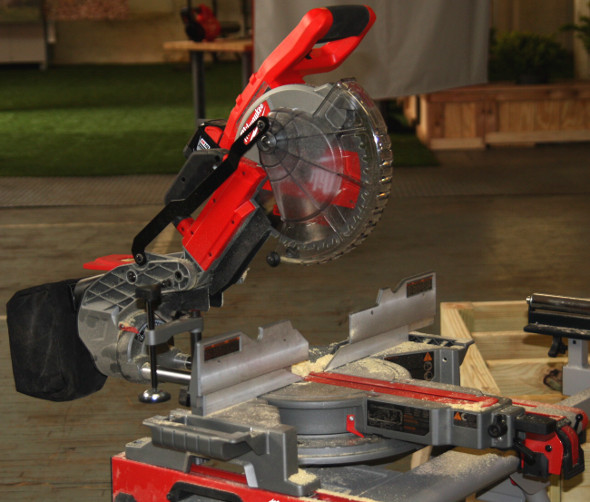 The M18 Fuel tool that everybody has been waiting for is finally a reality, and will be available starting around September 2016. Milwaukee Tool showed off their M18 Fuel brushless cordless 10″ sliding compound miter saw at the 2016 New Product Symposium last week.

There’s no compromise for going cordless on this saw. Unlike many cordless miter saws, this saw features a full 10″ blade spinning at 4000 RPM, no doubt thanks to its brushless motor. It can cut up to 6″ baseboard trim against the fence, and up to a 2×12 dimensional lumber flat against the table. All while weighing just 45 lbs, or 47 lbs with the 9.0Ah pack.

I asked about whether you can pair the cordless miter saw with a lower capacity battery pack, and was told that you CAN use it with a 5.0Ah battery pack without noticing any performance degradation, but of course you’ll get fewer cuts per charge. 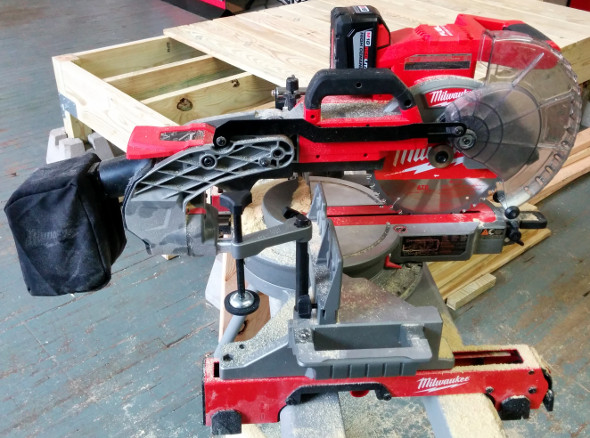 This saw is designed to be portable, and not just because it’s cordless. As you might have experienced, some sliding miter saws are a chore to move around. This one has carrying handles on the sides, and also on top of the saw. When it’s time to move the saw, the bulk of the saw slides forward into the base, folds down, and locks into a compact position. 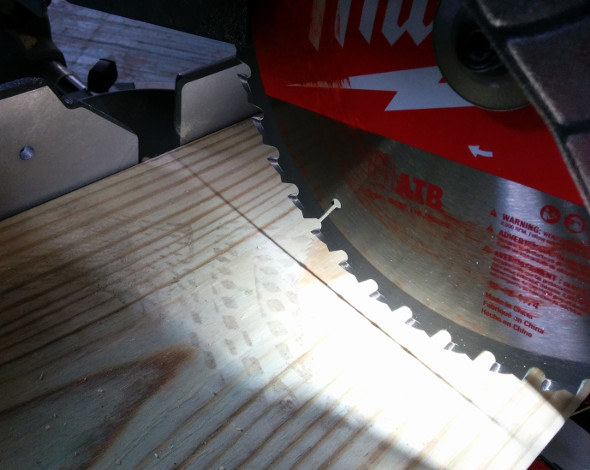 With the shadow cut line indicator, there’s no laser to knock out of alignment. A light shines down both sides of the blade, produce a shadow of the edge of the blade, teeth and all, onto the workpiece. The shadow is also supposed to be more visible in sunlight than a laser.

When the blade is brought down to the workpiece, the shadow line is perfectly matched with the kerf of the blade, showing you EXACTLY where and how wide your cut will be. 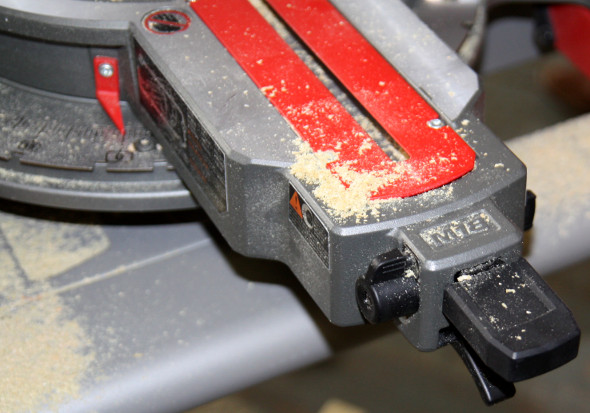 The miter adjustment plate is stainless steel and can be adjusted if the saw gets out of square. To change the miter angle, you pull up the top cam lever and swing the arm left or right until you hit a detent. If you want the saw to swing and adjust freely or override the detents, you can pull the bottom trigger. Pushing the cam lever down locks the angle in whether you are on a detent or not. 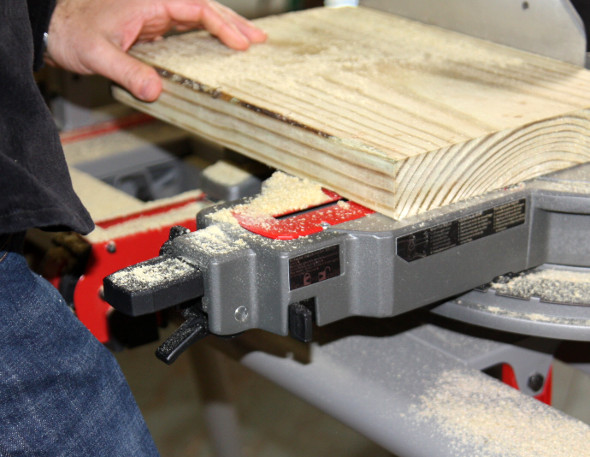 That little lever on the right side of the saw is a chop lock. By toggling it and pushing the sliding carriage all the way back, you can lock the sliding mechanism so the miter saw operates as a regular miter saw. 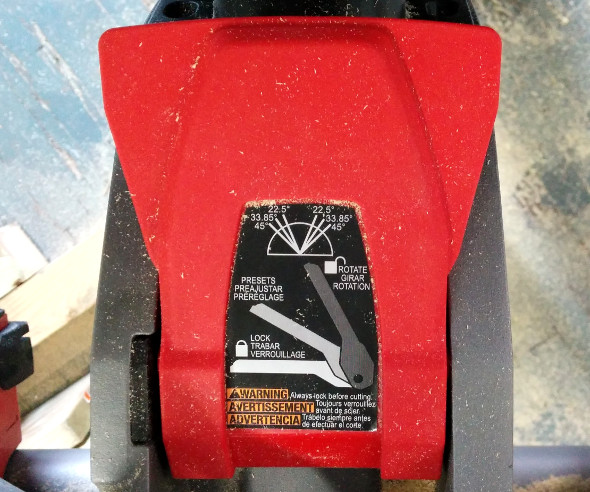 The dual bevel is adjusted by lifting up on a paddle on the top of the saw. Lift it up fully and you can adjust to any angle. If you let it go to halfway down after that it’ll stop in detents at common angles. 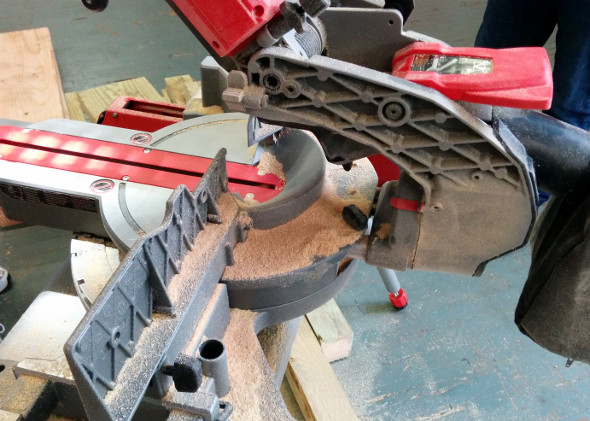 Rather than having the head slide on rails, the rails slide in and out of the body of the saw. This makes the saw more compact and protects the rails from damage during transportation. 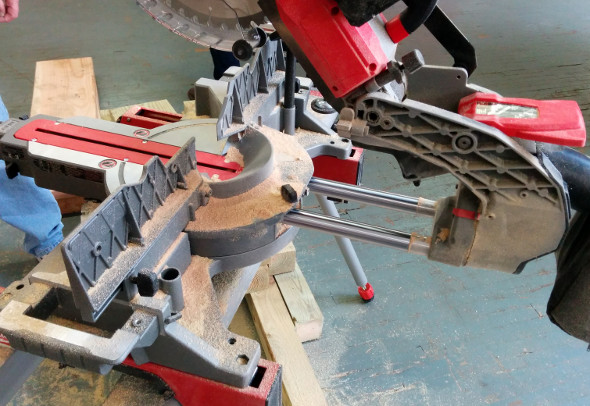 Here you can see how deep the saw is, with the rails fully extended. You save a lot of space with this type of sliding mechanism.

It should also make the saw easier to carry, since the docked position centers more of the weight within the base. 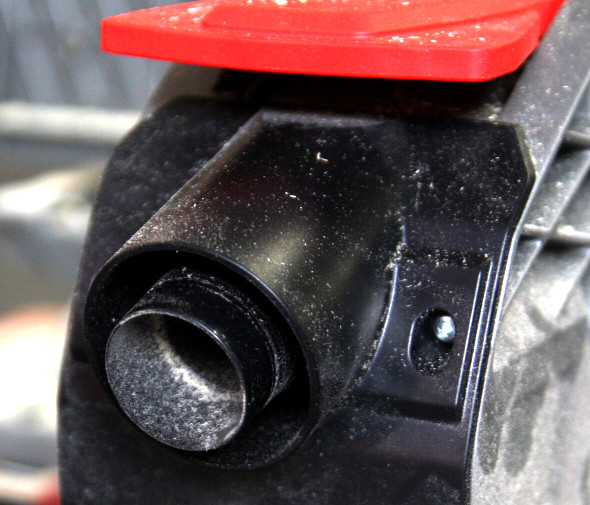 On the back of the saw there is a dual 1-1/4″ and 2-1/2″ dust port, so you don’t need an expensive adapter to use your common shop vacuum to collect the dust. The saw does come with a dust collection bag, but we have never seen one that works all that well. 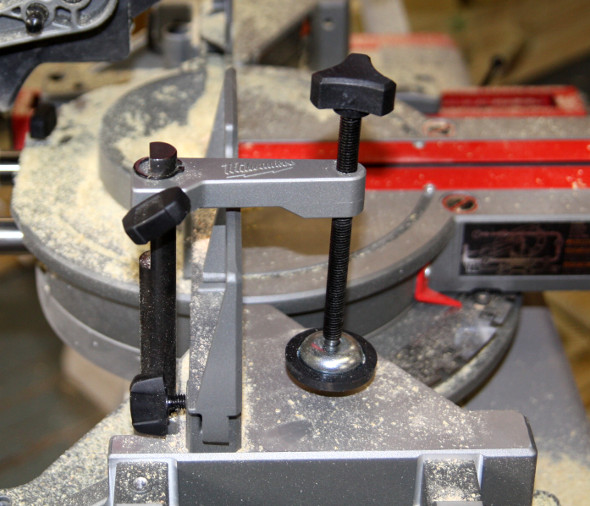 The saw has locations for two removable hold-downs, one on the left side, and one on the right. If you don’t need them for the cut, you can turn them around so they are in back of the fence. All the saws that were setup had one hold-down placed on the left.

Nobody mentioned if a hold-down came with the saw or it was an extra accessory. I would guess that each saw comes with a single hold-down, but will check on this. 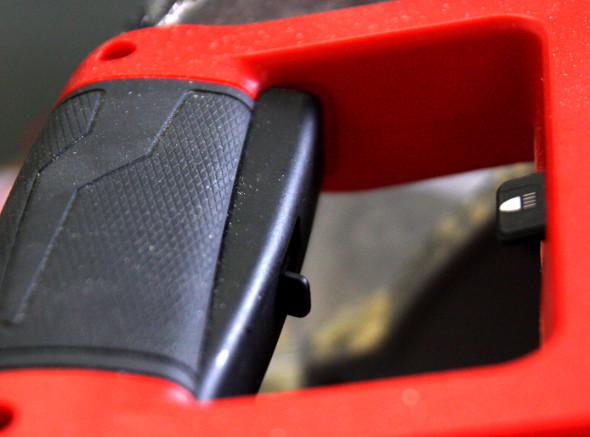 The safety mechanism on the handle was new to me. There’s a little lever that you push to the side before you can squeeze the handle to start the saw. Also pictured above is the switch to trigger the shadow cut line indicator. It’s the one with the little flashlight graphic.

Milwaukee demoed the saw with a 10″ 40T blade, but when I asked what blade would be shipped with the saw, I was told it might come with a 60T blade. I was concerned about a difference in run time, but he assured me that is should be minimal.

This is just one of many tools that Milwaukee is soon coming out with. Check out all of our other Milwaukee NPS16 media event coverage here!

Here’s the actual presentation, thanks to Charles & Hudson. It’s the very same presentation I, and everyone else at NPS16, had seen live.

Many people were impressed by the power of the saw when they tried it out, but I didn’t get that impression at first. Only later did I really appreciate why.

My initial problem is that, when you use a miter saw, you are used to the motor bearing down and making a deeper noise when it is in the meat of the cut. This miter saw didn’t seem to do that it. The motor seemed just as happy spinning freely as it did in the middle of a cut. When you think about it, that is a real feat of motor control. 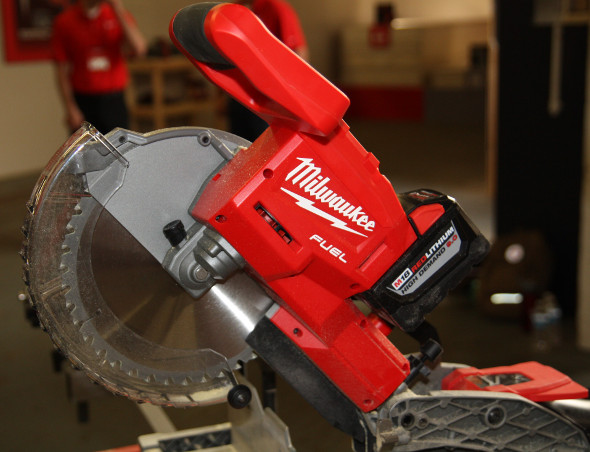 As I was looking over my photos of the saw, I noticed something interesting about the motor. Most double bevel miter saws have motors that are mounted horizontally across the top of the miter saw, so they spin in the same plane as the blade. It looks like the motor of the M18 Fuel miter saw is mounted vertically so the motor rotates perpendicular to the blade’s rotation.

Most miter saws have “sidewinder-style” motor configurations. This one does not.

I’m not sure why they engineered the saw with this type of gear transmission. Maybe it’s because the compact brushless motor allows them to, maybe it’s so there are fewer moving parts, or maybe this configuration provides a smaller footprint when the saw is folded down for transportation and storage. Or it could be for greater power generation.

The only other saw that I can find with this configuration is the Festool Kapex, a $1500 saw.

I am really impressed with the level of thought and care that Milwaukee engineers put into the design of their M18 Fuel cordless miter saw. I’ve only cut a few boards with it in a controlled environment, but the only thing that might give me pause before buying this saw is the price, compared to an equivalent corded saw.