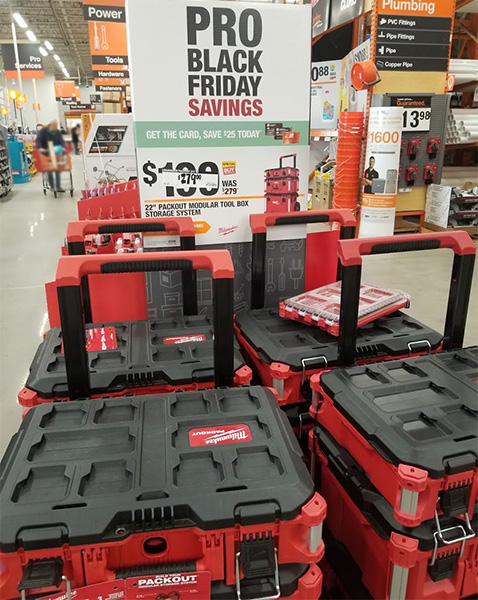 Home Depot’s PRO Black Friday 2019 tool deals are live! Well, all but a few of them. Milwaukee’s Packout 3 tool box stack is already on sale at holiday/special buy pricing at some other retailers. But at Home Depot? I’m not quite even sure how to describe it.

Update: I checked again after 1am ET, and the Packout combo is NOW on sale for $199. 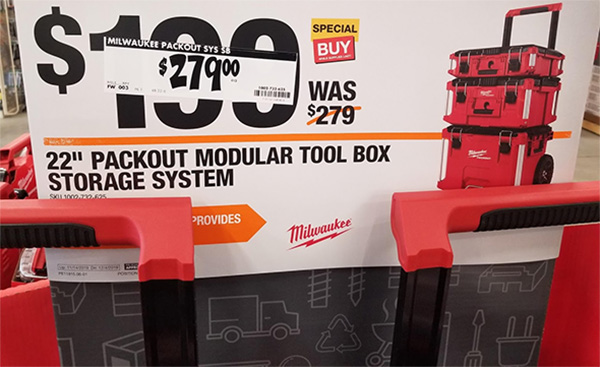 I checked online prices this morning, and was surprised that the Milwaukee Packout tool box combo was not yet discounted – it was still coming up at $279.

Maybe it was an in-store promo? Nope. This Home Depot store had big signage with a $279 price sticker placed across a much taller $199 price. Smooth.

Looking at the inventory for nearby stores via Home Depot’s website, I see that some stores have dozens of Packout tool box combos in stock. Dozens. 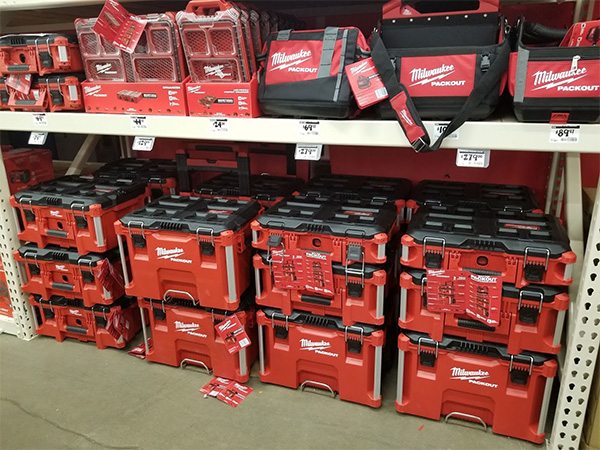 You know, I thought 6 of these Packout tool box combos was a lot. My store has them nice and neat in the gift center bay, and one or two elsewhere on the sale floor. This image was from earlier in the month.

Well, according to Home Depot’s website, that store actually has 64 Packout tool box system special buys in stock. The store I visited today is said to have 33 in stock. Another store nearby has 72 in stock. A couple of the next-closest stores have ~4 dozen Packout combos as well, each.

In the past, there would be a couple of Packout tool box combos and then that would be it. A few more showed up at one of my local Home Depot stores last year a little later in the season.

But several dozen Packout tool boxes at each store?

Unfortunately, we don’t have any way of asking Home Depot corporate for details about what’s going on with this. There are some people I could email, but I’m tired of waiting for replies that never show up.

So, let’s guess as to what’s happening. In my opinion, this will be a DoorBuster-type Black Friday tool deal. Maybe the decision was to save the deal for Black Friday instead of PRO Black Friday week.

Home Depot’s online Pro deals usually go into effect on Mondays. Maybe these tool boxes will be included in “part 2” of the Pro Black Friday tool deals that will kick off next week?

Isn’t there a better way of communicating things to customers?

I considered that maybe the signage went up early, but there’s “up” and “down” guidance for stores at the bottom left corner of the sign, and it says it’s supposed to be up today, 11/14/19, which corresponds to the start of the other Pro Black Friday deals.

Maybe some stores don’t have enough supplies yet?

Having “was $279” pricing next to a large $199 price that’s crossed out with a smaller $279 price sticker? That’s just comically confusing.

I think the most likely explanation is these tool box combos will be on sale, but that maybe the start date has changed. If you can’t wait for Home Depot, other Milwaukee dealers have this and a slightly different combo on sale for $199 each right now.

As of 1:18am ET, the $199 deal is currently LIVE on Home Depot’s site. You can order online for home/work delivery, or select in-store pickup. Hopefully someone can report back with in-store pricing tomorrow.

To clarify, there is signage indicating that these Packout tool combos are supposed to be on sale. It was a Pro Black Friday in the past. Other retailers have it as a current special at $199. Home Depot stores have unprecedented levels of these tool box combos in inventory.

But, Pro Black Friday kicked off today. Discount pricing was covered at a local store. The online price is still $279.

There’s no indication as to why the combo is not on sale now, but all the empirical evidence screams “this combo WILL be on sale.”

There is one big unknown: Why isn’t it on sale now?

And then, when will it be on sale?

This isn’t something that happened at one store. The Packout special is full-price at Home Depot’s online store, and the one nearby store I checked today. Maybe it’s a regional kickoff delay? That’s a main purpose of the post, to share notes and collectively figure out what’s going on.