ToolGuyd > Power Tools > Cordless > New Dewalt ToughSystem Music 2.0, DWST08820
If you buy something through our links, ToolGuyd might earn an affiliate commission. 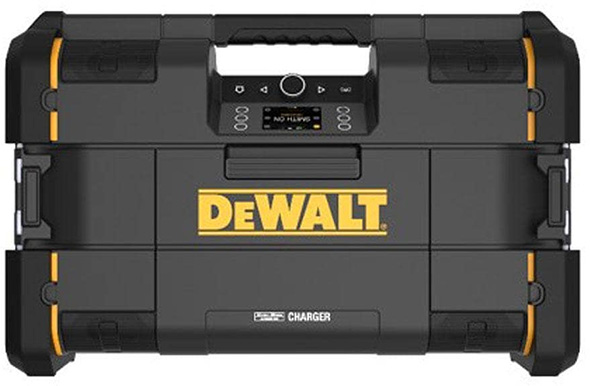 We have learned that Dewalt is coming out with a new cordless Bluetooth-connected music player, the ToughSystem Music 2.0, DWST08820.

Milwaukee recently showed off a new M18 Packout jobsite radio at NPS19, and it sounded amazing. The unofficial emergence of the ToughSystem Music 2.0 seems to be purely coincidental, but nevertheless sets the stage for strong competition between the two brands.

We don’t know a lot about the new Dewalt ToughSystem Music 2.0 so far, but enough to start drooling over it. Dewalt was not able to share any additional details with us, or an ETA. If I had to guess, I’d say that we can expect to see it in stores in a couple of months, by Fall 2019, just ahead of the winter holiday shopping season. We know that the Milwaukee Packout radio is due to be released in November. These are the types of products brands, retailers, and users want to see launched by Thanksgiving. 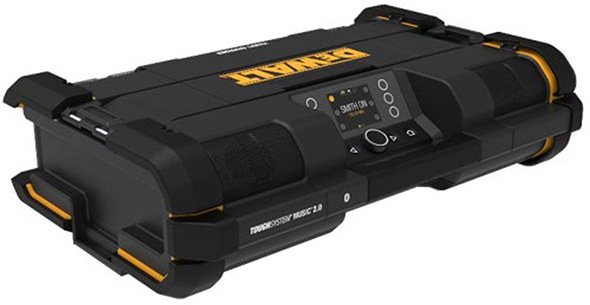 It has a 55W RMS amp and delivers your tunes through 4 full-range speakers, an active subwoofer, and an assisted bass resonator.

A large compartment stores your mobile device, and you can also recharge your gear through the ToughSystem Music 2.0’s USB port, which can provide up to 2.1A.

Additional features include a color LCD display with touchscreen capability, and IP54 protection against dust and water ingress.

The Dewalt ToughSystem Music 2.0 speaker/radio/charger can work with 12V Max, 20V Max, or FlexVolt Li-ion batteries. I would presume that its internal compartment is therefore large enough to include even Dewalt’s 12.0Ah battery.

Lastly, as you might have guessed from the name, it’s compatible with Dewalt’s line of ToughSystem modular tool boxes and accessories, with mounting points on both the top and bottom.

The new Dewalt ToughSystem Music 2.0 looks similar to the original, but with noticeably updated styling and a new user interface.

The 2.0 also looks to have a new larger battery compartment.

Some of the ToughSystem Music 2.0 feature updates seem to have come from Dewalt’s newer Tstak-sized music player, such as the large singular internal battery and device bay.

We’re eager for more details, and of course a listen, but the Dewalt ToughSystem Music 2.0 looks great, and if it sounds as good as its predecessor, it’ll be sure to gain favor with users.

New Dewalt ToughSystem 2.0 Music Player is Getting a Lot of Negative User Reviews