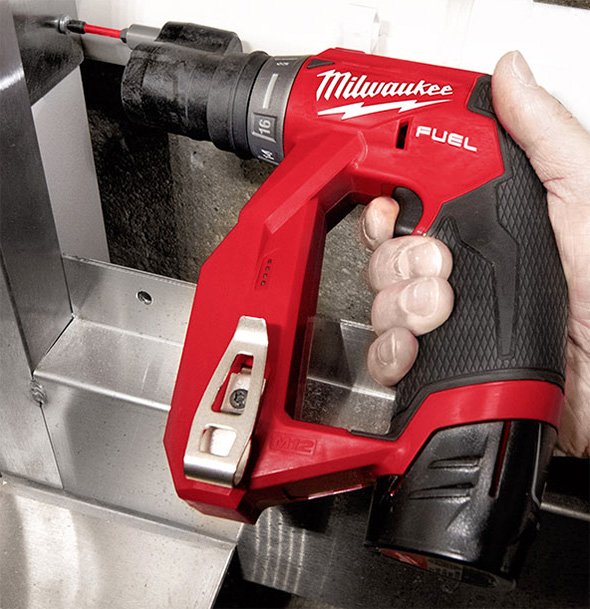 As a reminder, we attended Milwaukee NPS19 at their expense; our travel, hotel accommodations, and scheduled meals were provided for. In our experience, this is typical practice for hosted media events.

As many people commented, the new Milwaukee M12 Fuel installation drill/driver looks much like the Festool CXS cordless drill/driver.

What is an “Installation Drill/Driver?” In a nutshell, it’s a modular drill with 4 interchangeable heads. The goal here, in my opinion, was for a tool that’s compact and convenient. This would have been a good opportunity for a cool name, something like the “Sidekick.”

Long-time ToolGuyd readers might be thinking “didn’t Milwaukee come out with something like this already?” Yes. They came out with an M12 Fuel multi-head hammer drill, and before that a brushed-motor M12 multi-head drill/driver. This one is different. 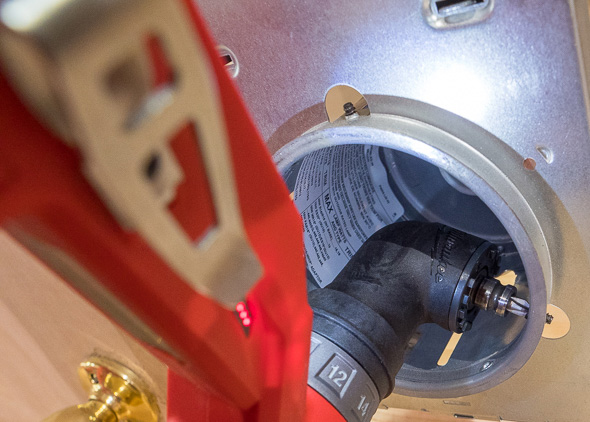 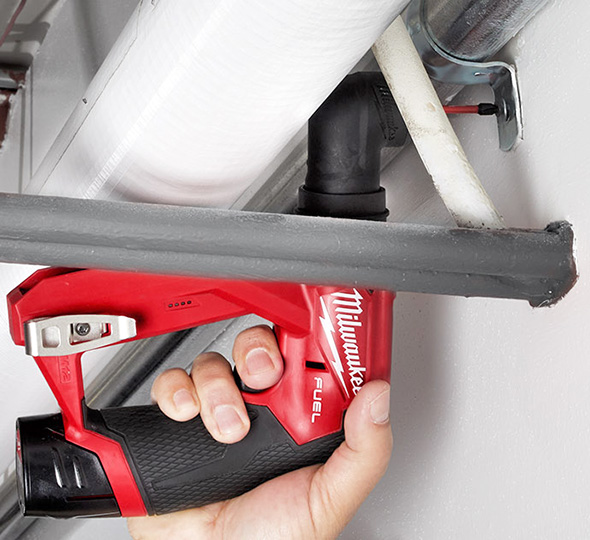 It can also reach around obstructions and drive fasteners that are close to adjacent surfaces.

Here’s a ~40 second video intro. This is also the only imagery I have of the tool without a chuck attached.

The new Milwaukee M12 Fuel installation drill/driver has a 1/4″ hex chuck and can be used without any of its attachments. 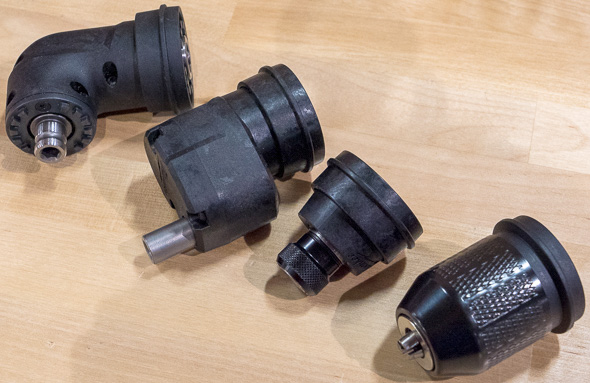 The kit comes with 4 attachment heads – a right angle bit holder and attachment interface (more on that soon), an offset bit driver head, a hex bit driver with quick release, and a drill chuck.

I believe it was the quick release hex bit holder head that I accidentally jammed a 1″ insert bit inside. My imagery shows that the right angle drill head can hold a 1″ bit easily, and I believe the same is true of the tool without any chucks attached. The quick release bit driver head worked well with 2″ power bits. 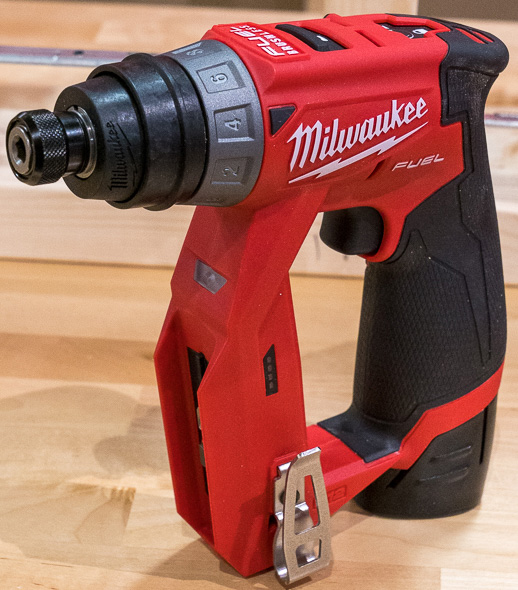 You can use screwdriver bits without any chuck attached, but the quick release head might be a good choice when holding longer bits. 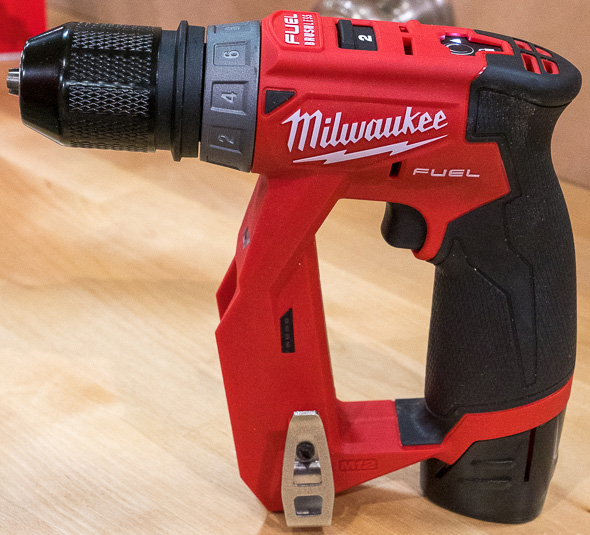 The 3/8″ drill chuck can be used for light drilling applications.

At this time I’d like to mention that the different chucks and heads were quick and easy to attach and remove. The interface seems robust and allows for 16 different attachment positions. There is a slight gap between head and base handle interface, but the system seems trouble-free and resistant to dust or contaminants. 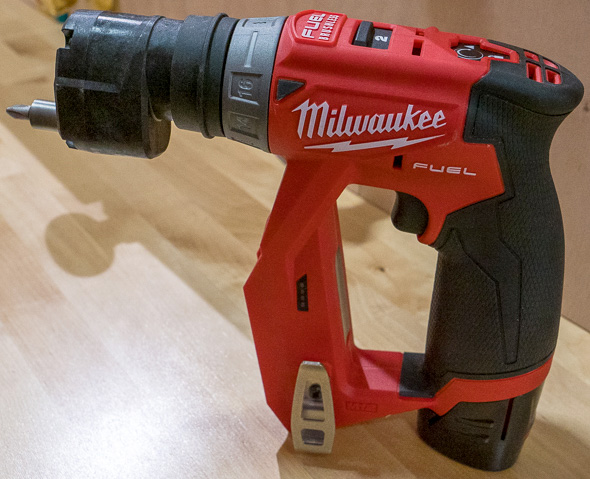 The offset head is the one you want for reaching around obstacles or for accessing fasteners that are close to adjacent surfaces. 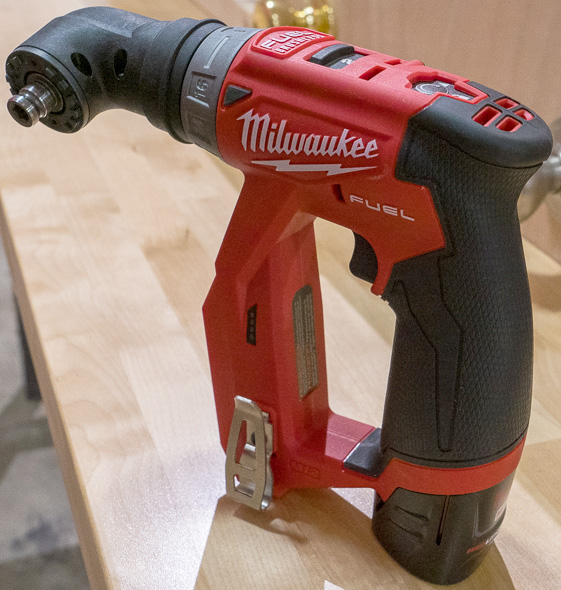 The right angle head is useful for reaching into tight spaces or corners. 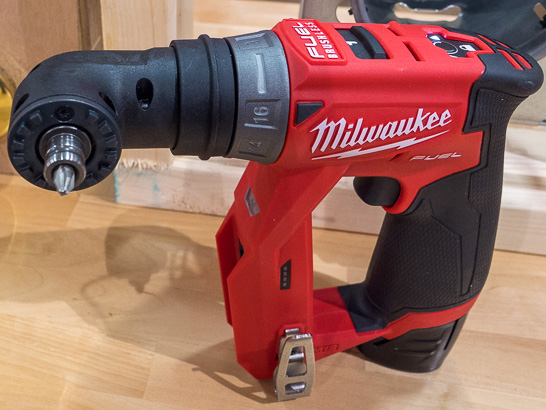 If you look closely, it’s not just a right angle bit holder head, it’s also an interface that you can attach the other tool heads to. 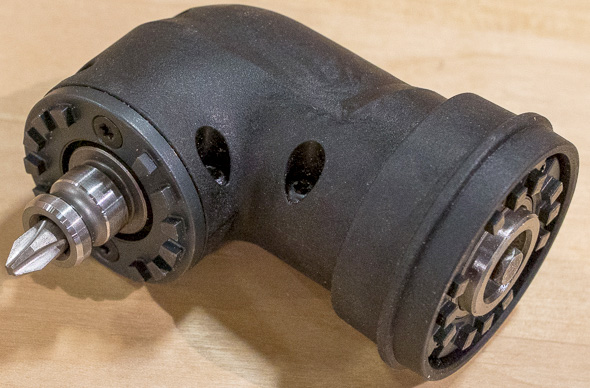 Here’s a closeup of the right angle adapter. The same interface is built into the front of the M12 drill. Again, I’m sorry for neglecting to capture any photos of the “bare” drill.

As you can see, you can easily attach the drill head (or the others) to the right angle head. 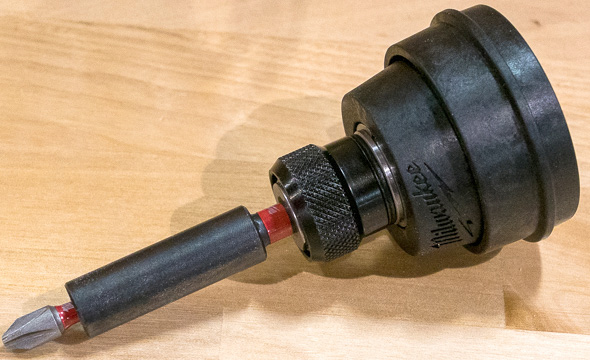 I remember taking this photo right after having to pry the very end of a 1″ bit out of the quick release chuck. In other words, keep in mind to use it with bit holders or power bits. 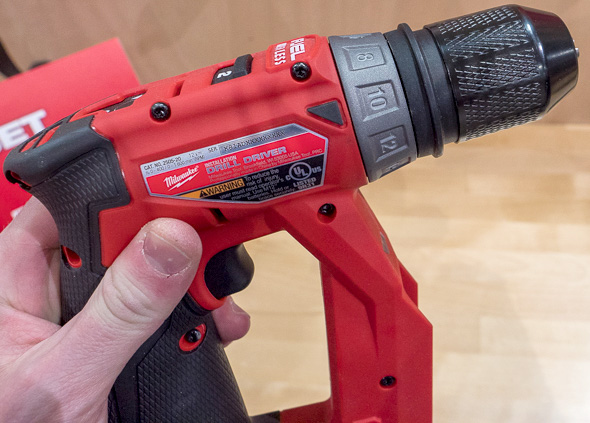 The M12 Fuel installation drill is slender and molded unlike traditional cordless drills. It looked a little long with a drill chuck, but felt balanced. Of all the new Milwaukee tools at NPS19, this might be the one I’m most looking forward to trying out on projects.

At the rear of the handle, that’s where your thumb and forefinger wrap around, for an “inline grip” with your middle finger squeezing the trigger. You don’t have to hold the tool like that, but it’s an added option for working in tight spaces. 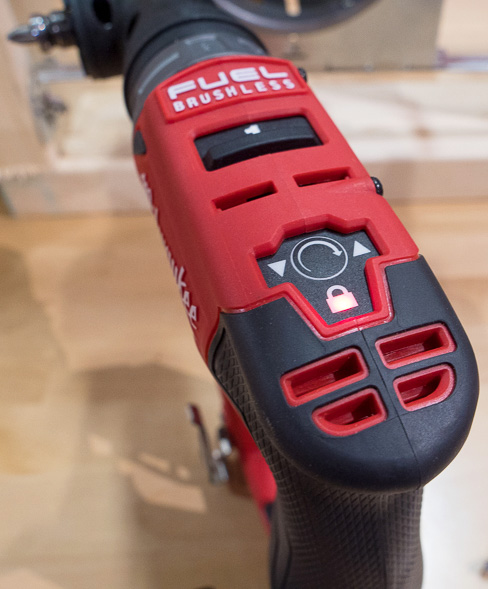 The directional selection switch is electronic, and you have to press the control button to select between forward and reverse rotation. To select the “lock out” setting simply hold down the button until the lock graphic lights up red.

The 2-speed selection switch is mechanical.

We talked about this feature a couple of times after the event.

When handling the drill, I found myself hunting for the direction selection switch. This is likely something that one can become accustomed to with some use. Muscle memory is adaptable.

However, someone brought up a good question. What if you over-drive a fastener and want to back it out? In their experience, this is sometimes necessary, and it is convenient to be able to do so without disengaging the tool and bit from a fastener. With the electronic controls, there might some scenarios where you need to back out a fastener but with the top controls blocked against a work surface.

I can see why they did this – the direction selection lever of a traditional cordless drill takes up a lot of space. With this M12 Fuel installation drill and driver, having a smaller tool was the priority.

Here, you can see the front tool interface (I know I said I didn’t have an image of it, but I don’t think this one counts), and the magnetic bit holder. For the record, I wasn’t the one who loaded up the magnet with the bit holder extending past the bottom of the tool like that.

The front part of the drill has some of the electronics, which allows for a smaller handle grip. There’s an LED light and also the battery fuel gauge, and possibly the brushless motor controller as well. The belt clip can be mounted to either side.

In addition to the bit holder, the front part of the handle also serves as a tool support, allowing the drill to be placed upright on a horizontal surface. There is some protection on the sides of the tool, but it seems to be most “natural” upright.

I’m quite excited about the new Milwaukee M12 Fuel installation drill/driver. There are some things that I like about it, such as the versatility its different chuck attachments provide, and some things I love, such as its small size.

The drill can deliver up to 300 in-lbs of max torque. One of the demos showed that it can at least drill 7/8″ clearance holes in a wood stud. It won’t do it as fast as Milwaukee’s heavier duty cordless drills, but it can do it.

Whereas the other Milwaukee M12 Fuel cordless drills are heavy duty and can even replace some compact 18V-class drills, this is more of a compact companion tool. It seems to be well equipped for assembly, installation, and other light drilling and driving tasks.

Some users are not going to like the shape of the tool, or the compromises that come with it, such as the electronic direction selection switch. I like the idea of it, but I’m not yet sold on it. This is one of those tools that will need to be proven with use. There are plenty of Festool CXS cordless drill users that love that tool’s similar design, but Milwaukee’s is a little different.

As of now, the ETA is September 2019. We’re double checking with Milwaukee to see if we can get added specs and pricing information ahead of the official announcement.

I really like the way the individual heads attach to this installation drill/driver compared to the Bosch FlexiClick. The Milwaukee has a ring you pull to attach and remove the heads, rather than a ring you turn.