ToolGuyd > DealGuyd > Reader Question: Should I Buy a Cordless Power Tool Promo Bundle Now, or Wait? (Plus Some General Advice)
If you buy something through our links, ToolGuyd might earn an affiliate commission. 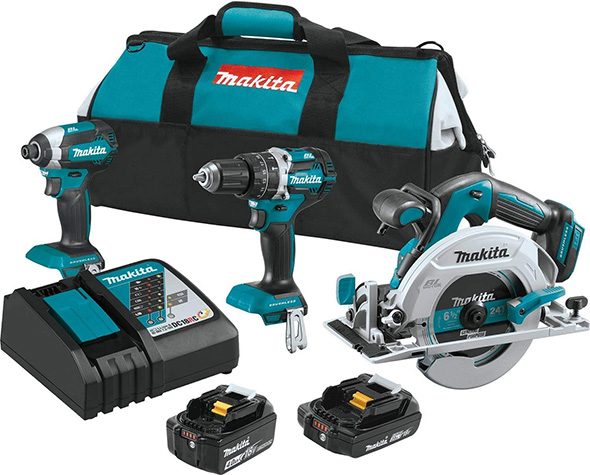 Spending a couple of hundred dollars on a cordless tool kit can be a process, given the number of decisions you have to make. It’s a little more stressful when you want to make sure you’re getting the best deal, getting maximum value out of every dollar spent.

I’m looking to make my first investment in tools, and I’m really interested in the HD kit +2 free tools deals, as there are great brands and brushless tools in most of them. I’m particularly interested in the large Makita bundle (really want a circle saw) plus a router.

My question is – do you think Amazon will have a competitive sale? I have lots of Amazon credit that would cover a big bundle/kit.

There are three main kinds of deals. First, there are “buy this, get that” types of deals, where you can buy a cordless power tool kit and receive a free tool (or tools), or bonus battery packs. Then, there are big “bang for the buck” deals where you get a lot for your money. Often, these kits have compromises in some way or another. Lastly, there are other “special buys” which might be exclusive to a certain retailer, or retailers.

I’ve made it easy (or relatively easy) to check back to see what retailers have done in the past.

The deals change a little, year to year. There’s no telling when the “best” deal will come. Sometimes it’s a seasonal deal that kicks off by early November, other times it might be a Black Friday deal, and sometimes it might come in December.

The trick to maintaining one’s sanity is to remember that a lot of retailers are flexible with returns, meaning that there is the potential to change your mind.

If you choose to wait for a deal, perhaps have fall-back. Some deals do expire abruptly, as either supplies run out or sales limits are reached.

When looking at power tool deals, or perhaps before, jot down your priorities. What are you flexible about? If you want a better drill, don’t settle for a combo kit that comes with a “holiday special” version. If you want a circular saw but don’t necessary want or need a reciprocating saw, take that into account.

Getting back to Daniel’s question, I don’t recall seeing a “buy a combo kit get free bonus tools” promo at Amazon, at least not for the Makita brand. Amazon has run Dewalt deals like that in the past, or at least something like that.

There are numerous bundle listings on Amazon that feature the Makita router:

Amazon has special “bundles,” where the bundle price can be less than the sum of its parts. We saw this recently, with a Dewalt 5Ah battery 2-pack and charger bundle.

One could speculate that they’re getting ready to feature these bundles in a promo. Both promos were “first available” November 1st, 2017. But there’s no guarantee. I didn’t notice or mention promos on either of these bundles last year, and looking at price trackers, the bundle prices never changed. There *might* be promo pricing on them this year, but if one made that assumption last year, they would have been wrong.

Home Depot’s free bonus tool offer is on the XT333X1, and there are some new Amazon listings that feature this combo kit. (I discuss the Makita XT333X1 cordless combo kit in more detail here.)

One of those bundles features the XT333X1 kit with a 6Ah battery and a router. The listing first went up in late September of this year.

There is no way to know if it’ll be on sale. And if it is, will you have the same number of choices as with Home Depot’s deal?

Home Depot’s deal should last throughout the holiday season, or at least it has in the past. Supplies *could* run out, which has also happened in the past. But, other retailers, such as Acme Tools, also have an XT333X1 + 2 bonus items offer. There, though, you get a 6Ah battery as one bonus, and only have a choice for the one other bonus item (which can be a router). Acme’s offer ends 1/31/19.

Most deals are centered around the most popular “core tools,” which means that if you want something like a router included, there’s a lot less selection, which makes it easier to make a decision.

Daniel, if in your shoes, I would wait until perhaps the Tuesday after Cyber Monday, to see what happens. If Amazon will have a similar deal, or something even better, there’s a higher chance that it’ll be apparent then. Of course, there could also be a surprise deal later in the season.

There’s also the possibility of selecting a different combo kit and ordering the router separately, as part of a Cyber Monday money-off or percent-off promo, or similar. But that goes back to thinking about what your needs are or will be.

If you want a drill, impact, and circular saw, there’s no need to sink money into a different bundle, such as one that also has a reciprocating saw and jobsite blower.

Speaking in general, it’s very tempting to second guess a purchasing decision. Did you do right by getting a 4 or 5 tool combo kit $399 when there’s a new 6-tool combo for $349? Since the tools are generally different, yes.

At the same $399 price as the XT333X1 + router + something kit that you’re looking at, there’s also the XT706 bundle, which has 7 tools. But those tools aren’t brushless (except for the grinder).

It’s too easy to get caught up in a “I want the maximum value” mindset, because it can be in conflict with what you’re actually looking to buy.

I’m glad to help answer any questions, although I cannot always do so in a timely manner this time of year.

I loved Daniel’s question, above, even though I don’t have a concrete answer for him, because he knows exactly what he wants. When someone asks me “what’s the best deal on cordless power tool kit?” I could answer it with several thousand words and maybe 20 ideas, and still be miles away from what they’re actually looking for.

When looking for the best cordless power tool, think about what matters most to you. What is the best deal for you? Some people might want a specific selection of tools, others might want more capabilities for minimal money, such as a 8+ tool “special buy” kit that can serve immediate and unforeseen future needs.

As far as waiting to see what other deals there might be, this is a good question to ask:

What happens if I wait?

In response to Daniel’s question, will the router sell out before the promo ends? I don’t have enough data to answer that. It’s possible it will. But everywhere? So in Daniel’s case, my process would go like this – i) wait until say 11/27. If Amazon doesn’t offer the same deal by then, I’d buy from a participating retailer. In the days leading up, I’d check inventory. If my first choice retailer (excluding Amazon) sells out, I’d look at second and maybe even third choice participating dealers. If supplies of the router, base kit, or any other part of the promo are depleting, I might cut short my wait and order promptly. Some items might be restocked mid-season, but that won’t be true for everything. Even then, some stores might allow backordering.

Speaking generally, things become so much easier with a plan, because it can take emotion out of the equation. Holiday season deals play on our emotions, on the satisfaction we get from saving money on items that we perceive to be of greater value than what we’re paying.

Figure out what you want ahead of time, and try to come up with a plan. Speaking as someone who loves to help and offer advice on Black Friday and Holiday season tool deals, it’s so much easier to answer questions when some decisions are already made. Otherwise, the pool of information is too great to sort through. And if I have trouble sorting through everything, even with years of experience analyzing scores of deals and “special buys,” it’s going to be a lot harder for someone shopping for their first tool kit.

How Big is Makita’s Cordless Power Tools and Accessories Business in North America?