ToolGuyd > Power Tools > Cordless > Ryobi 18V One+ Fan Review
If you buy something through our links, ToolGuyd might earn an affiliate commission. 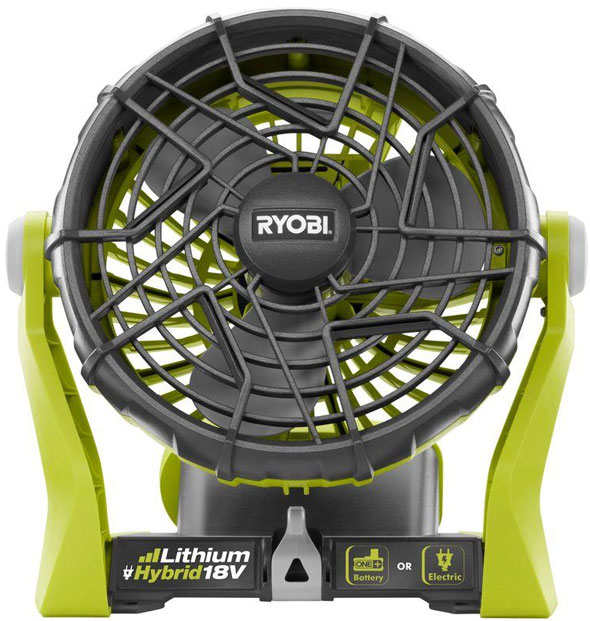 Ryobi has recently came out with a new hybrid cordless One+ fan (P3220) that can be powered by their 18V battery packs, but it can also be used with any standard 2-prong power cord.

We have one in for testing, which is perfect timing too. It’s not scorchingly hot these days, but it’s hot enough where cooling aids are definitely appreciated.

There are three areas the new fan shines:

First, the two power options mean you can go cordless for portability and placement convenience, or plug it into an AC outlet for infinite runtime.

Second, I like how the fan offers multiple mounting options. Thus far I’ve only placed the fan on flat surfaces, but the built-in hook and screw mounting holes look like the could come in handy down the road. There are also small hooks on the sides, but the manual doesn’t mention how these are intended to be used.

Third, the fan actually works! I expected it to have wimpy airflow, but it’s capable of outputting a decent amount of air. It won’t product a gust of air, but it’s enough for a personal fan.

Blade diameter is about 7.5″ (this is a rough measurement), and there are two speeds – low and high which spin the blade at 1400 and 2100 RPM, respectively. The fan has a pivot range of about 100° or so, which is enough for my liking, regardless as to whether it’s placed on the floor, a benchtop, or potentially hung from the wall. 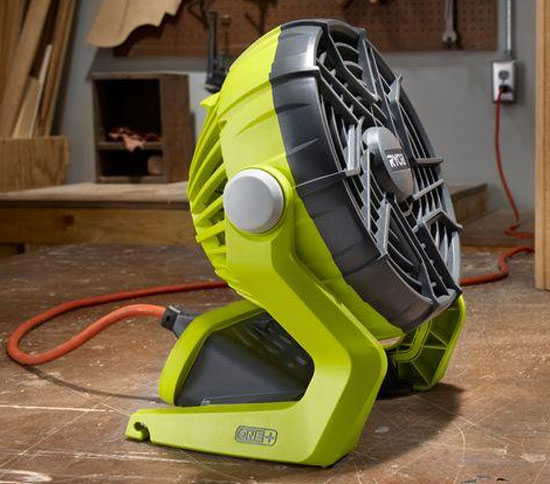 I haven’t completely drained a 4.0Ah battery in one go, but runtime looks to be decent. Specs for the similarly-looking cordless-only fan say that it can be powered on the low setting for up to 10 hours.

The user manual specifies that the battery should be recharged after about 5 hours to prevent deep discharging the battery too often, as this could damage and shorten the life of batteries. There’s a warning on the back of the fan that mentions this as well.

It’s too soon to tell for certain, but the overall construction seems to be top-notch. I liked how the fan was ready to go straight out of the box, with no assembly or setup required. The fan doesn’t come bundled as a kit with batteries or a charger, but those can be purchased separately for as low as $60 for a battery and charger combo.

I haven’t yet hooked up the fan with an extension cord, but it’s nice to have that option. It should be compatible with standard heavy-duty extension cords. There’s a chart in the user manual that’s not too helpful, as it doesn’t mention current draw. But, going by the chart and the “please recharge the battery after 5 hours” warning, a 16-gauge 25′, 50′, or 100′ cable should suffice.

Overall, I found the new hybrid fan to be a delightful addition to Ryobi’s 18V One+ lineup. Yes, that’s right, I called it delightful. I was doing some work outside the other day, and when resting indoors it was easier to bring this fan to me than for me to sit closer to a floor-standing fan.

Could it be better? Not in any way I can think of, unless Ryobi made it larger, but that would also increase the size, weight, and cost, while decreasing its runtime and portability.

Price: $40 for the bare fan, battery and charger are sold separately.

There’s also a cordless-only version (P3310) available for $30. It looks like both fans are identical, except for this new hybrid fan’s added plug-in AC option.

Thank you to Ryobi for providing the review sample unconditionally. Review samples are typically given away, donated, or retained for editorial and comparison purposes.