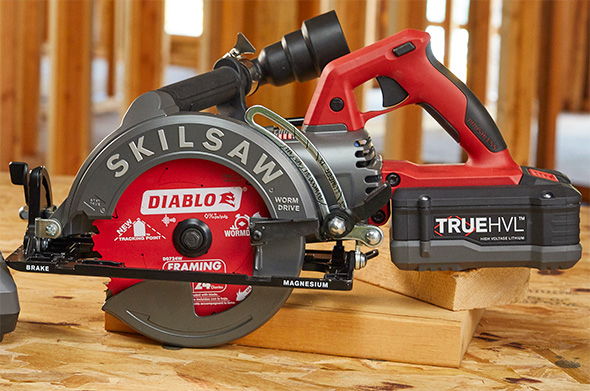 Skilsaw says that their new cordless worm drive saw features the same design, balance, and controls as their corded worm drive saws, and so “it feels familiar right out of the box.” It’s said to offer cordless convenience without any compromises in power or performance. 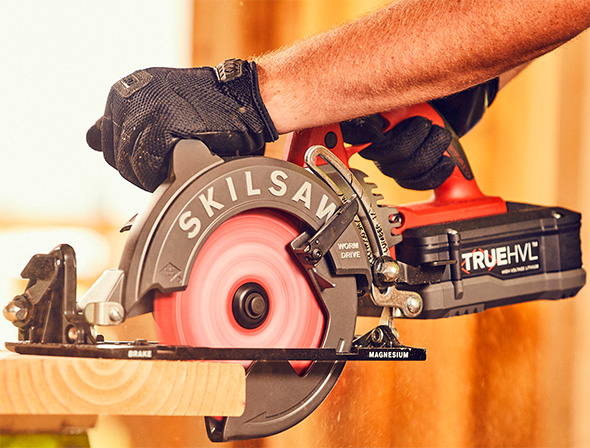 The new Skilsaw cordless worm drive saw is designed for high-performance use, for all of the types of wood-cutting applications you might use a heavy-duty corded worm drive circular saw for. 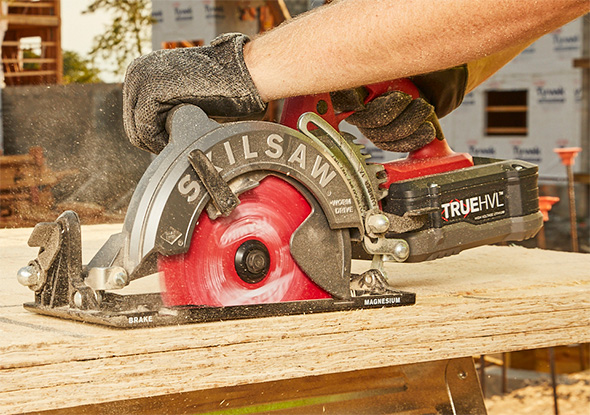 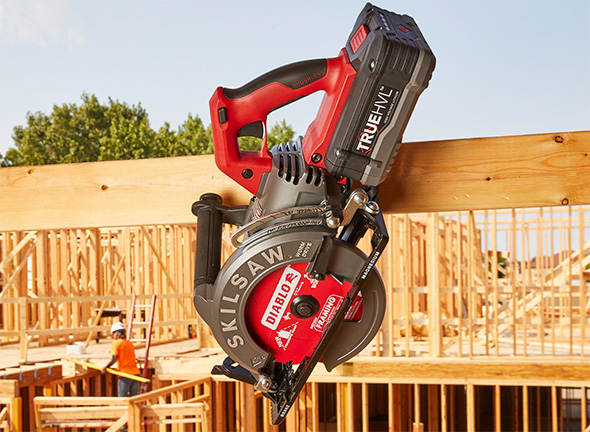 The saw has a rafter hook on its right side. I’d say of course, but some other brands have released heavy duty cordless circular without hooks. 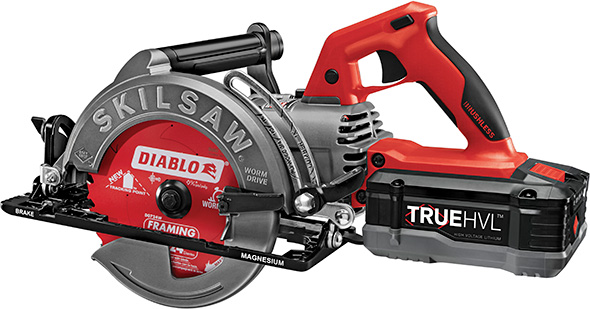 The saw features magnesium motor and gear housing, and a magnesium shoe, for lightweight and durable construction.

There are going to be a couple of different package options, including with a Diablo circular saw blade. 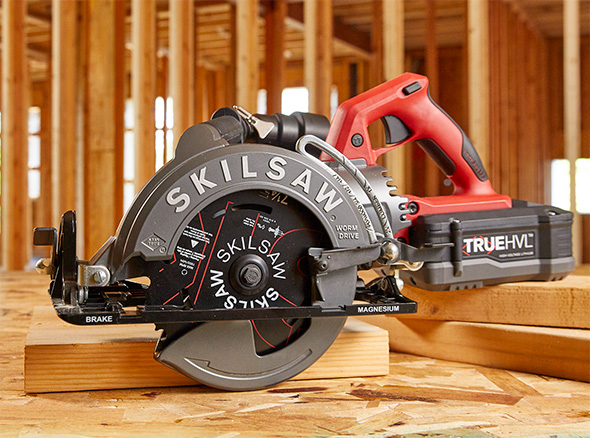 Other kit options will include a Skilsaw blade. 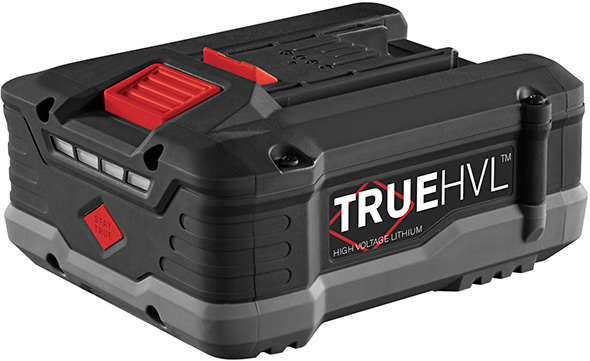 Skilsaw has taken their latest technologies and created the TRUEHVL battery system, a 48V Li-ion platform.

The cells are arranged in a unique configuration to evenly distribute heat. Their “Stay Cool” technology wraps each cell in a temperature-controlling material that helps to keep the cells cooler. All this is said to result in better performance and extended runtime.

An intelligent power management system maximizes power by monitoring and optimizing each cell.

Skilsaw says that a fully charged battery pack should power an entire day’s worth of cutting. The saw can make 425+ cuts in 2x4s per battery charge. 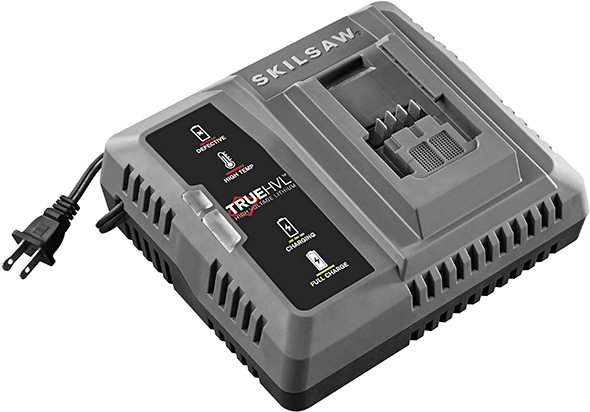 Skilsaw’s charger will fully charge a drained battery in 1 hour.

Wow, there’s a lot to take in. Skilsaw has a saw on its way to us, and so we hope to be able to do some quick testing and comparisons before the new saw launches.

This is Skilsaw’s first cordless tool on their new 48V Li-ion platform, and with the 5.0Ah rated at 240 watt-hours. Assuming they’re using 2.5Ah cells and rating each cell at its max voltage of 4.0V, that would mean their 5.0Ah battery is built with 24 Li-ion cells.

In comparison, Milwaukee’s largest M18 battery, their High Output 12.0Ah pack, delivers 216 Watt-hours max. If you use apples-to-apples calculations and consider Milwaukee’s M18 battery to be a 20V Max battery, it would also be rated at 240 watt-hours.

But, if Skilsaw is using modern larger-sized battery cells, they have the potential to pack even more energy into their battery packs. The Skilsaw 48V battery presumably has 24 cells of 2.5Ah capacity. Milwaukee’s largest M18 battery has 15 cells of 4.0Ah capacity. Skilsaw could potentially launch higher capacity battery packs, perhaps to power other heavy duty cordless power tools.

If my math and assumptions are correct, the largest current-generation Makita 18V X2 cordless power tool, fitted with 2x 5.0Ah batteries, would top out at 200 watt-hours.

It’s important to note that Skilsaw barely references the voltage of their TRHEHVL battery. They’re focusing on power and cooling, which is a different but welcome approach. From what we know so far, Skilsaw’s battery delivers high energy and features advanced cooling tech, and there’s room for growth.

We’ve asked Skilsaw about how their new cordless worm drive circular saw compares to other rear-handle saws, and have been told that more information is on the way.

Why is it a big deal that their new TRUEHVL cordless worm drive saw is a “true” worm drive saw, compared to other brands’ rear-handle “kind of but not really” worm-drive-like cordless circular saws? Skilsaw’s response seems to be a wink paired with “you’ll see.”

From what I can tell so far, there are two potential downsides. First, this saw is going to be heavier than Skilsaw’s corded worm drive saws. I asked Skilsaw whether their field testers remarked about the weight (a little of 15 pounds with battery) or if the cordless convenience provided more significant benefits, and they said “Only one delivers true Worm Drive power!”

Second, like all worm drive saws, this new cordless Skilsaw will require maintenance every now and then, as worm drive gearing occasionally needs to be relubricated. It’s ready to rock right out of the box. Brushless rear-handle circular saws don’t require worm drive gearing grease, but it’s not much trouble to lube up a saw’s gearing when needed. Heavy users shouldn’t have to do this too often.

I asked Skilsaw about what can be said to readers who ask “why buy a cordless power tool from a one-tool system.” They’re still preparing a response to that, but I would predict that 1) the cordless worm drive saw might provide enough of a performance benefit to offset having to work with another charger and system, and that 2) this probably won’t be a one-tool system, at least not for long.

In March 2016 I wrote a post: Skilsaw Should Come out with a Brushless Worm Drive Circular Saw. Woo! It took some time, and I was wrong about thinking about 18V-sized power, but it’s finally a reality.

Are you excited about the first-ever cordless worm drive saw?