ToolGuyd > Hand Tools > EDC, Pocket, & Multitools > Zancudo Knife Review – a Good Folding Knife for ~$30
If you buy something through our links, ToolGuyd might earn an affiliate commission.

The BRK-R1 Zancudo is a good folding knife, and it’s surprisingly affordable. If you shop around, you can find it for as little as $30. It is rather simplistically designed, but that’s not necessarily a bad thing. There are enough design distinctions that give the Zancudo its own personality, rather than it being just another low-cost folding knife.

Let me start off by saying that the Zancudo is not an ESEE knife. It’s a Randall’s Adventure & Training design, or at least endorsed by them, and manufactured by Blue Ridge Knives. Some retailers market the Zancudo as an ESEE folding knife, and I’m not sure why, hence the need for clarification. It seems that the Zancudo was in designed in part by the folks at ESEE.

I’ve talked about ESEE knives before, such as the Izula fixed blade knife, Candiru fixed blade neck knife, and EsKabar collaboration. I own a couple of ESEE knives, but they do not currently make any folding knives. The folding Izula knife is said to be in development, but the same has been true for a couple of years now.

Check out our other knife reviews here! 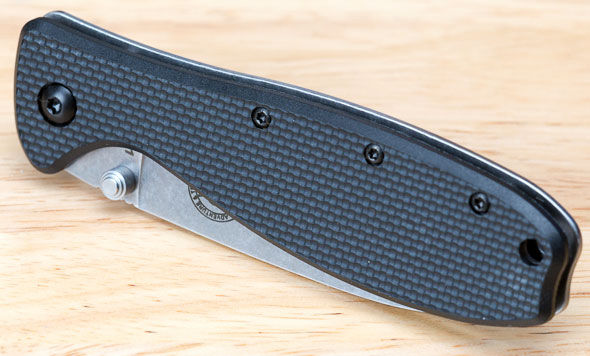 The Zancudo is a little smaller than I expected, which works in its favor. It’s compact and pocketable, without being too small of a knife. Its handle is a little boring, but provides a good grip. It doesn’t seem to be made of any fancy knife handle material either, and is simply described as being a polymer, which is just a fancy way of saying plastic.

The other side is made of stainless steel, which has a rather nice finish, which is a little darker in real life than how it shows in these photos.

The blade, like the handle, features an aesthetic stonewash finish.

After giving the knife a once-over and using it on a couple of test cuts, I found myself surprised that they only selling it for ~$30. I bought mine for $28 back in November of 2013, and it’s still around the same price.

AUS-8 is a good stainless steel knife blade. In general, it sharpens up nicely, but doesn’t hold an edge as well as more premium knife blade alloys. I haven’t sharpened my Zancudo yet.

I think I like the Zancudo knife’s drop point blade shape, although I can’t point out specific applications where it offers a definitive advantage. The tip lends itself well to higher precision cutting tasks, and I’m almost certain the long and straight section of the blade is good for back-and-forth sawing-like slicing cuts, such as when making clean cuts in cardboard. 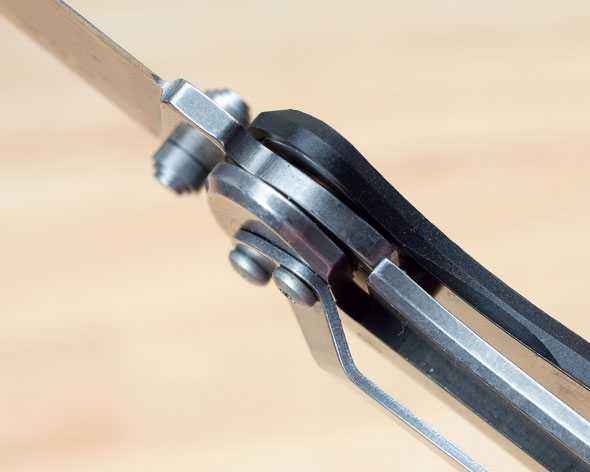 I have no complaints about the liner lock, which offers solid wobble-free engagement.

If I could offer one criticism, it would be how the inner surface could stand to be a little easier on my finger. But if it was more rounded, beveled, or otherwise relieved, the knife would be more difficult to close. Open and close the knife a couple of times in a short time with the same finger, and you’ll feel what I’m talking about.

Opening the knife is a cinch. The blade won’t fly open, but the thumbstud does its job and the pivot has only the slightest hint of friction.

The grip is comfortable, and probably cannot be improved further on a knife this size. It’s a little unusual in how it’s much wider at the bottom than the top, more so than other knives I’ve used. I have found that the shape of the handle tends to lead my hand a little lower and away from the blade. 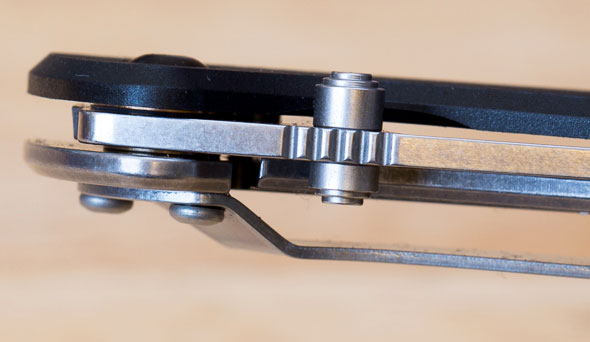 The thumbstud is asymmetrical, but there’s still enough of a stud for lefties to not be too frustrated with the knife. I went back and forth, opening the knife with right and then left hands, and couldn’t decide whether it was easier to deploy with one hand over the other. Lefties would probably want to remove the pocket clip and attach a lanyard pull instead.

Take another look at the photos that show the end of the handle near the back of the blade. It’s curved outwards slightly. If it wasn’t, then the small section of jimping would be more practical.

All I’m saying is that you shouldn’t look at pictures of the knife blade and think of the jimping as any more than decoration. While it might provide some enhancement to your grip, I really think the benefits are going to be marginal.

The Zancudo is a nice sized knife. Not too big, not too small.

If you want to carry the knife in-pocket, remove the huge pocket clip and attach a small piece of paracord as a lanyard pull.

I have been carrying my Zancudo in a pouch in my bag, but eventually that pocket clip is coming off. I wish the Zancudo clip was as low-profile and streamlined as the ones on my Kershaw Leek knives.

Am I in love with the Zancudo folding knife? No. But I certainly like it enough to recommend. If it was priced at $50 instead of ~$30, my position might be different. But then again, it would offer more if it cost more.

The handle shape is good, but I’m not used to my hand being led away from the blade, which the Zancudo tends to do. It’s quick and easy to get used to, and something I never would have noticed if not for the task of analyzing every aspect of the knife for this review.

As mentioned, I think I like the shape of the knife blade, and think it might provide advantages for certain use, but after more than a year and a half of occasional EDC rotation and use, I can’t offer specific examples.

The Zancudo is a good folding knife, and one that you shouldn’t pass up. It’s made in Taiwan, and solidly built.

A couple of months ago, I posted about cheap knives that don’t suck. Spyderco’s Tenacious ($35 via Amazon) and Persistence ($38 via Amazon) are specifically mentioned there, but why not the Zancudo? Honestly, it’s because I keep forgetting that the Zancudo isn’t an inexpensive knife. The Kershaw Leeks that I reviewed also seem to leave my mind whenever I think about cheap knives, despite their low pricing.

You get slightly better pricing at BladeHQ than Amazon, but Amazon has a lower threshold for free shipping. I bought mine from BladeHQ as part of a larger order.

There are additional handle colors and blade finishes. The one I bought and reviewed here has a black handle scale and stonewashed finish blade. You can also buy the Zancudo knife with Coyote brown, desert tan, olive drab green, and red handles, and your choice of stonewashed or black finish blades.