ToolGuyd > Power Tools > Cordless > Modified Flir E4 Thermal Imaging Camera “Before” and “After” Image Comparison
If you buy something through our links, ToolGuyd might earn an affiliate commission. 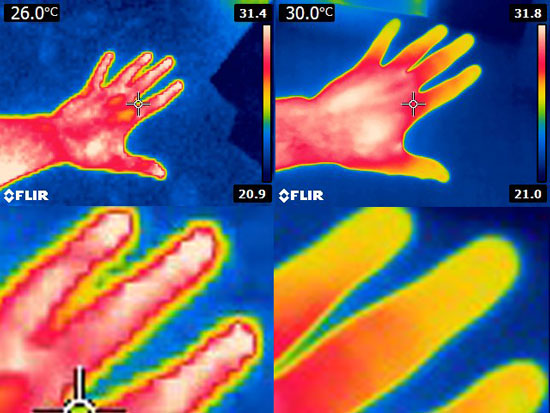 As discussed the other day, Flir’s new E4 thermal imaging camera can be easily modified so that thermal images can be captured using the full sensor chip built into the camera.

The E4 is capable of capturing 80 x 60 px resolution thermal images out of the box, but Flir actually built the camera with a 320 x 240 px sensor. Mikeselectricalstuff provides downloadable files and easy-to-follow modification instructions via the EEVBlog on how to do this.

While I desperately wanted to buy a 320 x 240 pixel thermal imaging camera to use for various ToolGuyd-related activities, I could not justify spending $5,000+ on one. We do have a few review samples undergoing testing, but they’ve been in and out of my hands.

I charged up the battery and took a few “before” tests. Then, I carefully followed Mike’s instructions and modified the configuration file.

Did it work? YES! Please note that these images are all enlarged by 50% to make them more suitable for web display.

The differences are pretty striking, aren’t they?

After modification, the E4 records sixteen temperature measurement data points for every one data point it records when brand new out of the box before modification.

So that’s 76,800 data measurements after modification vs. 4,800 measurements before modification. I confirmed this in the exported csv file. The unmodified E4 actually exports a file with 76,800 data points, but it contains 4,800 groupings of 16 identical measurements. I suppose this makes sense, otherwise the E4 would have to be engineered a lot differently than Flir’s higher-end EX-series imagers, which would have driven up its price.

Earlier in the year I had the opportunity to test out a Flir E60 thermal imaging camera, which is natively capable of capturing 320 x 240 px images. Newer E60 models also feature MSX image enhancement capabilities, but the model I tested did not come with this feature.

And here is an earlier image from Milwaukee’s thermal imager. Despite its lower resolution (160 x 120 px), the image quality is actually quite good. 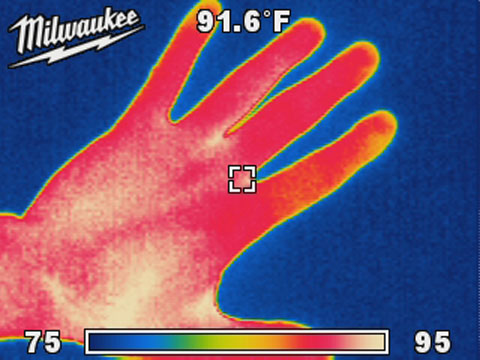 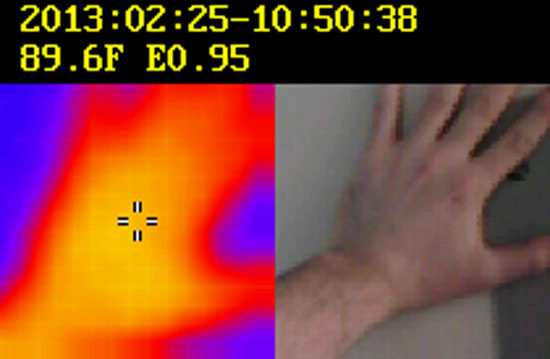 I plan to fully test and review the E4 in coming weeks, but thus far I identified two things I don’t like about it.

First, there’s a dead always-dark pixel in my LCD display. Although it bugs me, I don’t think it’s worth the hassle for me to return the product because of this. With my luck, the replacement would come with a fix that blocks the firmware modification that unlocks the power of the full sensor. If the camera LCD was something I would have to look at all the time, I would probably return it. Then again, I plan to use the E4 for years to come. Ah well, I’ll give it some thought.

Second, it only outputs jpg images. This wouldn’t be such a bad thing if it wasn’t for the compression artifacts. Flir’s Flir Tools software also doesn’t offer the ability to export images. You can only save the images over the previous one, which presumably adds more jpg compression to the mix. You can always re-edit the images over and over, but that’s probably not a good idea unless you save the original file somewhere else to preserve the original image quality.

Overall, I am quite pleased with how things worked out thus far. Even with the software modification, which improves the resolution and a few in-camera measurement functions, the E4 is still an entry-level thermal imaging camera.

If you do buy an E4 and decide to modify it, you do so at your own risk. There is always the possibility of “bricking” the device and rendering it useless. You have been warned. There is also no guarantee that the modification will continue to work. For continued discussion about the E4 and how it can be modified, check out the various threads about the topic over at the EEVBlog forum.

How to check which firmware is installed to your E4: