ToolGuyd > News > Hitachi Power Tools is Now Metabo HPT
If you buy something through our links, ToolGuyd might earn an affiliate commission. 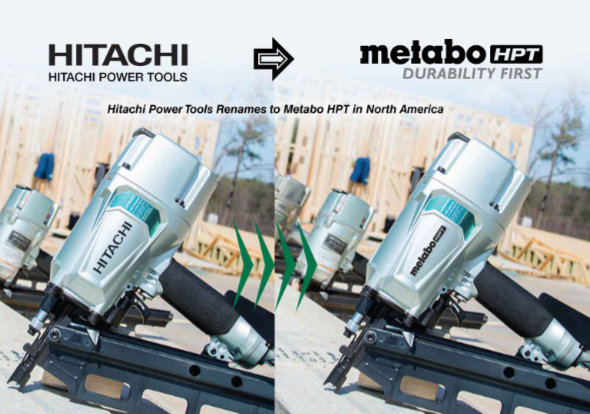 When I visited Hitachi in February, they only embargoed one big announcement. Today I can finally tell you what that announcement was all about.

Hitachi Power Tools will now be known as Metabo HPT in North America. You may have recently heard that Hitachi would be known as Hikoki. That will only be true in the European and Asian markets.

The transition will take place over the next two years and the first new tools launched under this name will be the new MultiVolt platform slated to come out in September 2018. At the same time, they plan on converting their fasteners and accessories to the new Metabo HPT name. Following in the next quarter, they want to finish converting the branding for all current tools.

The name change also won’t effect the warranty on your current Hitachi tools.

As you may have heard, Hitachi Koki, the parent company of Hitachi Power Tools, recently announced that it’s changing it’s name to Koki Holdings. Metabo HPT will be one of the brands Koki Holdings owns joining Metabo, Hikoki, and other companies like Tanaka.

Metabo HPT will be completely separate from Metabo, and so they will not share battery platforms or tools. They serve two different market segments. Metabo serves the metal working/industrial market segment while Metabo HPT serves the residential/multifamily construction market.

You might have noticed recently that Metabo has been trying to push into other US markets that would overlap with Hitachi, but Hitachi did not elaborate on how this new scheme would affect those efforts.

The reason for the name change is that they are no longer part of the large corporation known as Hitachi, which sells everything from consumer products to automotive equipment. Hitachi acquired Metabo a few years ago, and last year both brands were sold by Hitachi to KKR, a private equity firm.

Metabo HPT also said they want to expand their role in the residential and multifamily construction and enter into the electrical and plumbing tool markets.

Sorry, All Our Lowes Links are Down