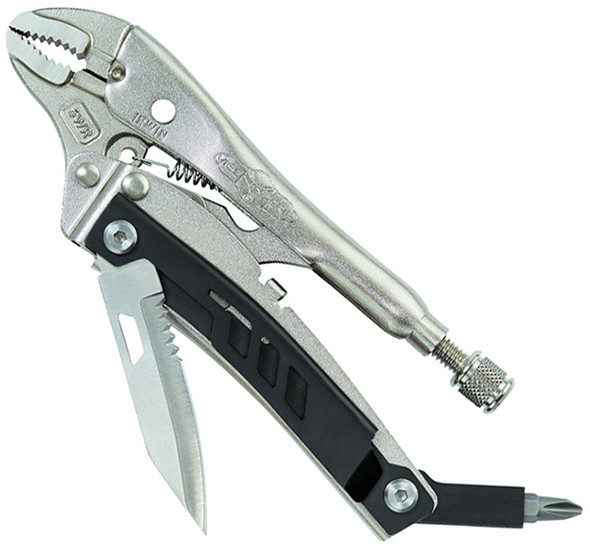 Yadda wrote in with a tip about new Irwin Vise-Grip Multi-Pliers, which are locking plier multi-tools. There are 3 new models, with the difference being the jaw shape and overall length: 5-inch curved jaw (5CR), 5-inch straight jaw (5WR), and 6-inch long nose (6LN).

I picked up the 5WR version of this Vice-Grip Multi-plier tool from my local Lowe’s.  Great idea, poor implementation in my opinion. The knife is barely usable on the 6LN.  Probably a Christmas item. 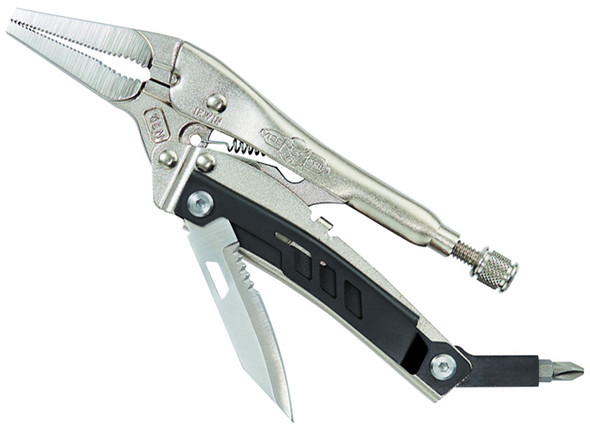 When I think of locking pliers multi-tool, I think of the Leatherman Crunch, which a contributor reviewed for us a while back. I have since bought one, and although I don’t carry it often, I really like its folding locking pliers design.

These Irwin Multi-Pliers seem to be regular “Fast Release” Vise Grip locking pliers with a knife blade and screwdriver attached to the lower handle. From the images, it doesn’t look like these features add to the bulk of the locking pliers. Actually, it looks like the entire lower handle was redesigned to neatly accommodate the multi-tool features.

Lowes, the only stocking distributor I could find, advertises these as 4-in-1 multi-tools. There’s the locking plier jaws, the built-in wire cutter, which is found at the lower jaw section, the knife blade, and the screwdriver bit holder.

Yadda, a long-time reader and commenter, bought one – the long nose version – and said that the knife blade is “unusable.” Looking at how the tool is designed, I cannot say I disagree. It looks more than a little awkward to use.

The screwdriver, which locks in straight as well, also looks a little awkward to use. If you ask me, it would be more versatile if it flipped open from the outside and had an additional right angle locking position, for when greater torque is needed.

While I would like to reserve judgement before trying these first-hand, I could tell you that Multi-Pliers already look like the type of tool I’d scoff at for being a gimmicky “junk drawer” tool – the type that has strong initial appeal but weak delivery. Maybe I’m wrong, but Yadda’s introduction doesn’t leave me which much optimism.

What’s your take on them? If you buy one, let us know how you like it! Am I wrong in my hesitation?