ToolGuyd > Hand Tools > Pliers > Have You Tried Knipex Locking Pliers?
If you buy something through our links, ToolGuyd might earn an affiliate commission. 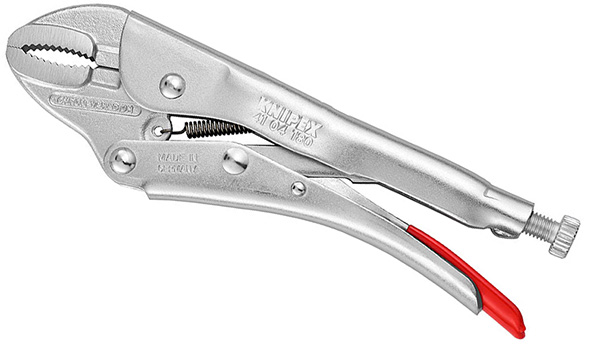 Have you tried Knipex’s made in Germany locking pliers? Surprisingly, I have not – yet – despite their reasonable pricing.

I have tried the design, though, which bears similarities to other brands’ locking pliers. The Euro-style locking pliers, for lack of a better description, features an unlocking lever much different than Vise-Grip locking pliers fans are used to.

Vise-Grips, and other brands inspired by their original design, feature a release lever that requires the application of pressure from within the handle and in an outwards direction. If you’re not careful, you can pinch your skin.

Knipex’s Euro-style pliers have a release lever that’s squeezed from the outside. While I own both styles of locking pliers, as well as more recent “fast release” types of pliers, I find I like the Euro-style locking lever quite a bit better. Despite having developed muscle memory for releasing Vise-Grips, the Euro-style release lever is simply easier to operate.

While I haven’t tried Knipex locking pliers yet, my experience with the brand and this style has me convinced that they’d be on the short-list should any of my Vise-Grip or Grip-on locking pliers go missing from my toolbox.

Knipex offers locking pliers in more traditional styles, such as curved/round jaws and long-nose, and also unique styles with pivoting or “universal” style jaws. The specialty styles are of course pricier.

If you’ve tried them, what do you think? If you haven’t, what are you waiting for?

If you want to try the style but at a lower price point, Tekton makes them as well.

There’s a whole lot to locking pliers brands and styles to throw at you, which is why in this post I wanted to focus on Knipex. It’s a brand a lot of you already know or have at least already seen or heard of. Their prices are reasonable ($21 for 10-inch round jaw, as of the time of this posting), and they’re one of few brands whose locking pliers are not made in Asia.