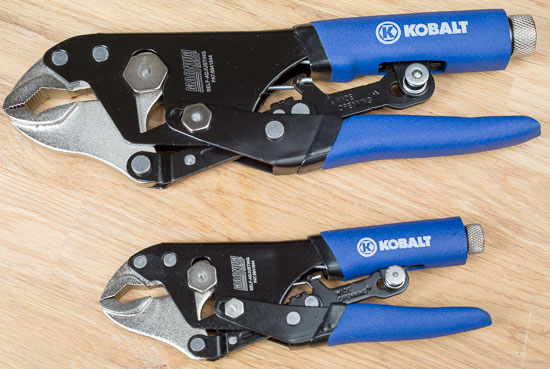 The other day we talked a little about these new Kobalt Magnum Grip locking pliers that self-adjust to whatever you need to securely grip. I have no shortage of locking pliers in my toolbox, but was curious to see how well these worked, and so I purchased this 2-piece set at my local Lowes to test out.

This set can be purchased online for $20 via Lowes, and there is also a special set that comes with a free bonus pouch (check availability).

Ratings Explained: The design seems sound, because the pliers do work as intended at least some of the time. But during testing, they rarely worked well, when they worked at all. Most of the time I wanted to throw them across the room and into the trash bin.

In theory, these pliers are easy to operate. The thumbscrew at the base of the larger handle is used to set clamping pressure, and a button between the jaws is used to set the jaw width from standard to extra-wide settings.

Open the handles, place the jaws around whatever it is you want to securely clamp onto, and squeeze the handles closed.

The pliers are designed to automatically clamp down on any size object or material that can fit in their jaws. To release, you simply open the handles.

That was in theory. In practice, I had a lot of problems with these pliers. 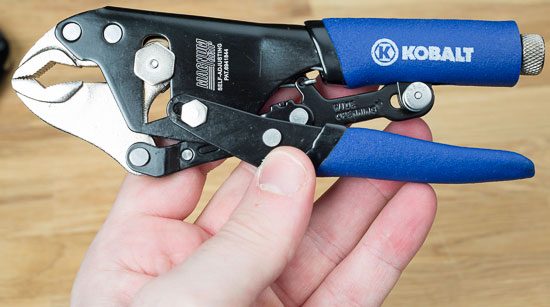 My first impression was optimistic. Both pliers felt solidly built and the handle grip material was comfortable. Not very soft and cushiony, but non-offensive and grippy. 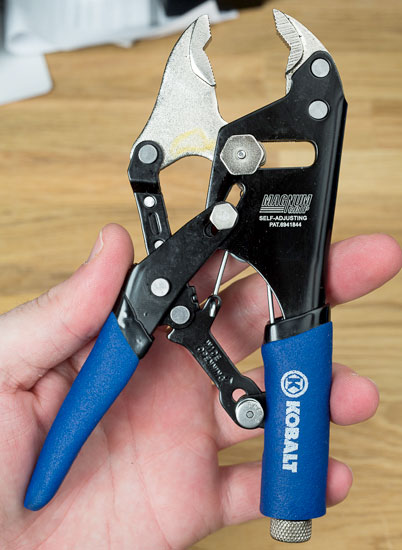 Opening the jaws wasn’t easy to do with one hand, so I used two. 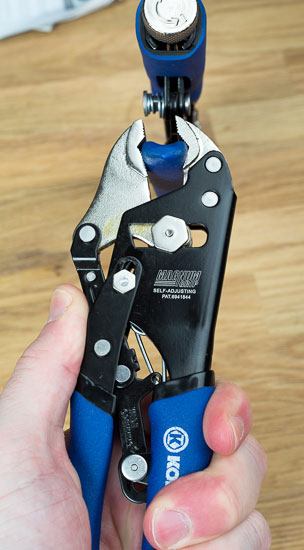 I wanted to see how the pliers worked right away, so I grabbed a test piece that was close to me – the larger Magnum Grip pliers.

I could NOT lock onto the smaller handle of the larger pliers. I could squeeze the handle closed most of the way, but it would not automatically clamp down like it was supposed to. 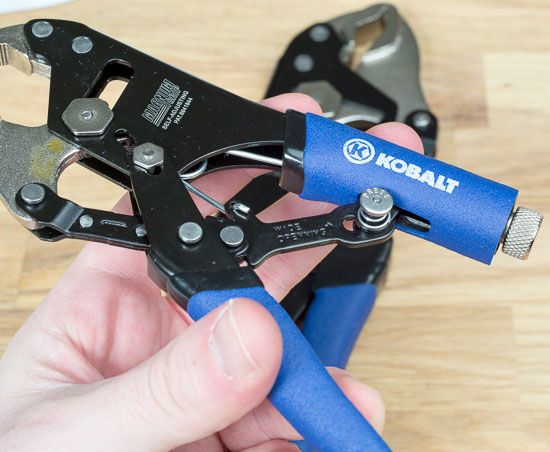 After a couple of failed attempts, I thought that widening the jaws might help. 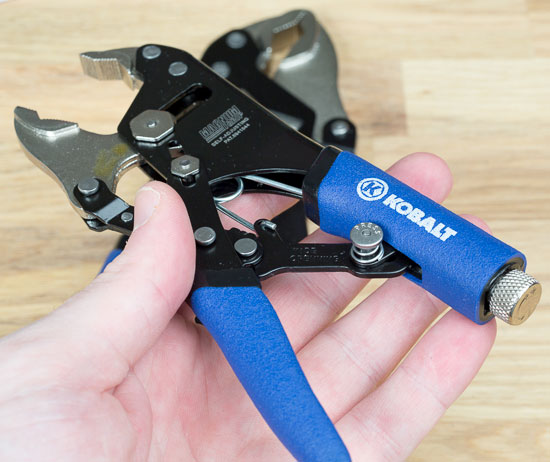 To widen the jaws, you press the button and closed the handles slightly such that the button pops into its second setting. 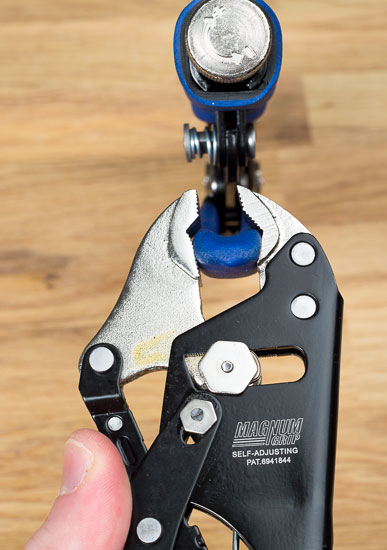 This didn’t help. I tried a few more times and gave up.

The pliers work great on larger objects, although the handles don’t feel as secure and pop open a little too easily.

But for some reason, they just don’t lock down on certain sized objects. I pulled out various-sized pieces of hex, square, and round-shaped hardware. Parts about 1/4″ thick and smaller can be very securely clamped, but require a lot of strength to do so.

Similarly, with the jaws very close together, opening the pliers is another strength exercise.

Objects about 3/8″ to 1/2″ in size can be a struggle to clamp down on. As mentioned, the small pliers cannot grip the larger pliers’ lower handle at all, but that could be due to its outer grip material and not its size.

I didn’t have any problems getting the larger pliers to clamp down on objects or materials of different sizes.

However, as with the smaller Magnum Grip pliers, the large version requires a lot more strength to clamp down on and release smaller items. 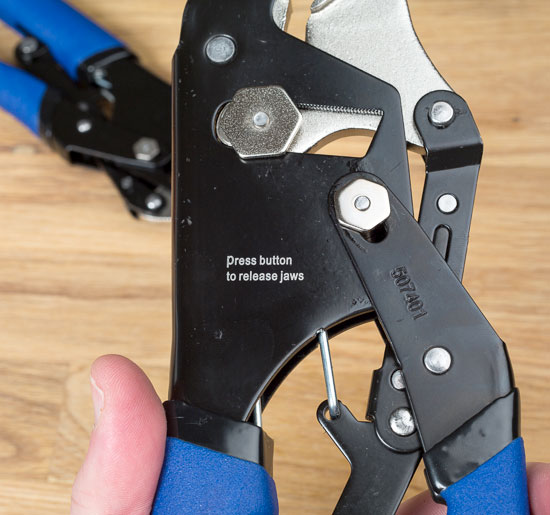 The larger pliers have a small note about how to press a button to release the jaws. 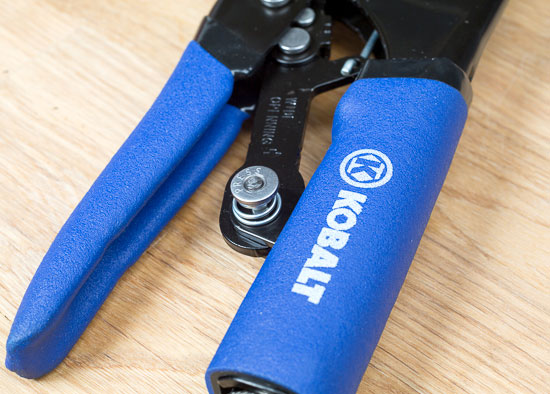 This button? It doesn’t work.

When holding smaller objects, both pliers can only be released by separating the handles with both hands. One-hand operation is not so difficult when clamping larger objects.

The jaws have a tendency to jam up. I show this a little bit in the video.In most cases a little wiggling of the lower handle is all that’s necessary to free them up. It’s not a big deal, but does slow down how fast you can use them.

Don’t even think about using these pliers on soft materials. That’s probably why I had difficulty clamping down on the larger locking pliers’ handle with the smaller ones, despite the softer-than-steel grip layer being very thin.

For instance, I tried clamping down on a thick air hose, and both pliers completely failed. I tried to adjust the clamping pressure, and it didn’t help. The jaws just stop moving and the handles don’t lock when squeezed together.

You can adjust the clamping pressure by turning the thumbscrew at the base of the upper handle. For most of my initial tests I set clamping pressure to the minimum setting. After I started running into issues with the jaws not locking, I tried setting the pliers to medium and maximum settings to no avail.

When clamping onto larger objects, the clamping pressure feels to be a lot lower than when gripping smaller ones. For instance, when holding onto a 5/8″ hex-shaped object, the smaller pliers release a little too easily. In one case, it popped open unintentionally when I bumped into it.

These pliers perform unpredictably, in how they react when clamping onto different types of objects and workpieces.

Smaller objects require a lot of hand strength to clamp into and release.

Softer objects that can bend or compress, even those that are relatively firm, cannot be gripped at all.

I have no use for pliers that only work sometimes. While the Kobalt Magnum Grip locking pliers work reasonably well on larger rigid materials and objects, that’s not good enough for me, and shouldn’t be good enough for you.

When used on ideal objects and workpieces, these pliers self-adjust quickly and easily. But they are a hassle to use on smaller objects, and practically useless on anything that can compress or bend even the slightest bit.

If you still want to give them a try, Lowes has a good return policy.

The biggest question now is which disappoints me more – these locking pliers or the new Kobalt Triple Cut utility cutters that we reviewed yesterday. I wouldn’t be as disappointed if these were specialty tools, but they’re not – they’re pegged as general purpose tools. General purpose tools that apparently don’t work on many of the things I want to use them with.

I will probably keep these around in case anyone has questions or wants me to test them on something different. But I want my money back. You can ask my wife – this is not something I ever say about tools.

If you want to try something better, I recommend CH Hanson Automatic locking pliers.

I can also recommend Grip-On locking pliers and the newer Irwin Vise Grip Fast Release locking pliers. Those styles are manually adjusted and perform predictably and on all material types. They don’t fail when trying to clamp a material that bends or compresses a little bit.