ToolGuyd > Power Tools > Cordless > Metabo HPT MultiVolt Tools are Here
If you buy something through our links, ToolGuyd might earn an affiliate commission. 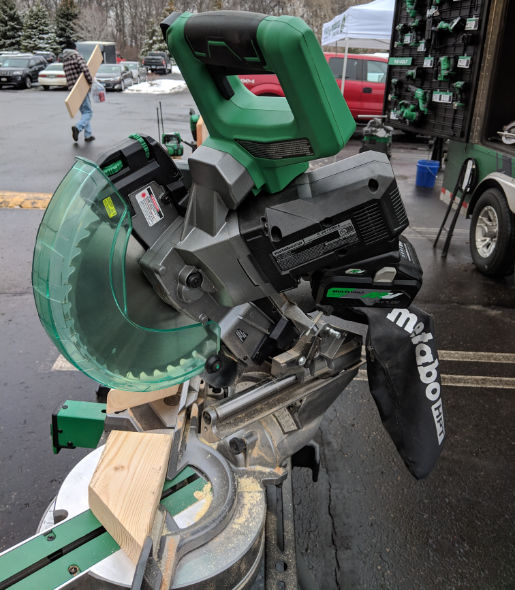 While I was at Acme Tool’s fall sale, I was able to quickly demo a few Metabo HPT (formerly known as Hitachi) MultiVolt tools. Several of the tools are now available for sale including the 36V dual-bevel 10″ miter saw shown above.

I wasn’t really able to challenge the power of the miter saw because the only wood they only gave me a 2×4. I did make a few straight cuts and a 45° miter and the saw didn’t even notice it was cutting through the 2×4. That’s a good start anyway.

I also didn’t notice any appreciable sawdust blowing forward at me unlike some other saws I’ve tested. As you can see in the photos, the dust bag definitely wasn’t catching all the sawdust, but then again there aren’t many saws that can collect dust well without a vacuum. 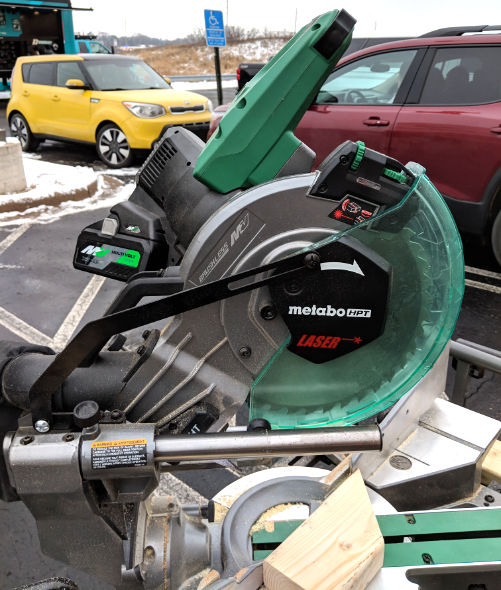 Notice that the rails are in the front of the saw and the motor slides forward, this allows the saw to be placed closer to the wall saving space. You’ll also notice the two thumb wheels right above the blade guard. These are for aligning the laser cut line without tools, although you can’t access them if you pull the handle down because the blade guard gets in the way. 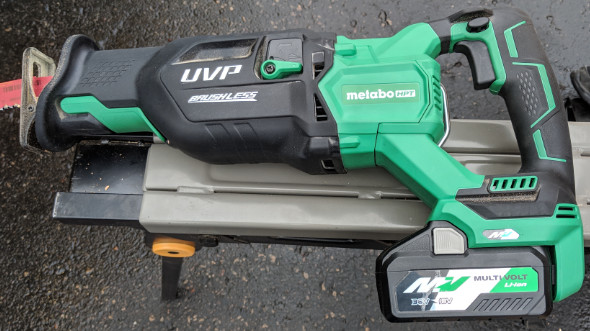 I was also able to try the 36V reciprocating saw. This new saw has a 1-1/4″ stroke length and a dual counter weight system to reduce vibrations transmitted to the user.

To test the saw they had set up a 2×10 in a Jawhorse. While the saw had plenty of power, I felt it vibrated more — not less — than other cordless reciprocating saws I’ve used. When I asked the rep about the vibration, he said that if you compare it side by side with other cordless reciprocating saws it should vibrate less because of the dual counter weight mechanism. I’m not convinced yet. 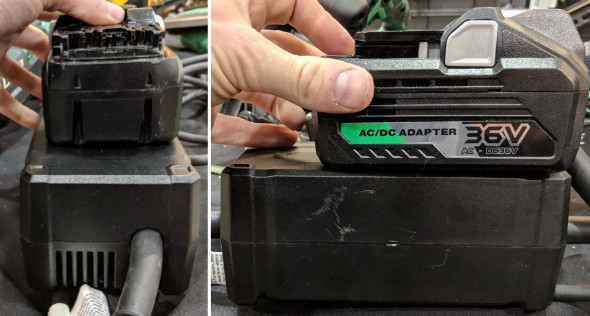 While I was inside the store, I was able to get some photos of the new MultiVolt AC adapter. It comes in two parts: a big box that the AC cord runs into, and the battery adapter that’s connected by a long cord. The battery adapter is about the size of a 10 cell li-ion pack.

As you can see above the big box is about 30% longer than the battery adapter, slightly wider, and slightly taller. What surprised me was how light both the battery adapter and the other box were. Their total weight is only 5.5lbs. I was expecting one of them to weigh significantly more because of the size of the transformer they’d need to use to get the rated 2000W output.

Talking more about output, 2000W is a little over what you can get from a regular 15A 120V circuit. The maximum number of watts you can draw should only be 1800W. I’m not exactly sure how they are specifying 2000W.

All of the MultiVolt tools are brushless, and the prices listed below are for the bare tool.

Several of the tools are already in stock at Acme Tools and others are arriving soon. I’ve even see a Metabo HPT display at Menards with the starter kit, circular saw, impact, drill, and reciprocating saw.

Acme does have a deal going where you buy one of the Metabo HPT bare tools and you can either get a free starter kit or 36V AC adapter. It works both in stores and online, but they say the deal is only good until supplies last.

The next big tool in the MultiVolt platform is the 36V cordless table saw, which is supposed to be based on the C10RJ 10″ jobsite table saw they currently sell. It’s expected to launch in early 2019.