ToolGuyd > Power Tools > Saws > New Ridgid 10″ Sliding Miter Saw
If you buy something through our links, ToolGuyd might earn an affiliate commission. 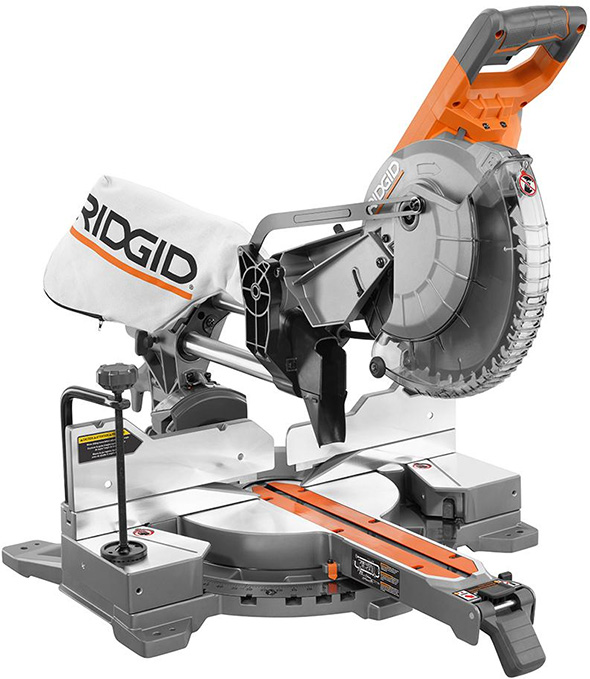 So, it seems that Ridgid has come out with a new 10″ sliding miter saw. A corded miter saw. That’s rare these days, but there are some noteworthy features.

Ridgid says that their new 10″ dual bevel sliding miter saw, R4210, sports the industry’s widest miter range on a saw of this size, with a 70° max miter angle.

Question: What do you think a 50-70° miter angle comes in handy for?

There’s an LED cutline indicator and work light, which projects a shadow at the cut location. Popularized by Dewalt, this has become an almost must-have miter saw feature for me. Since the cutline indicator is the shadow cast by the blade, it never needs alignment, and it “auto-adjusts” to the kerf of different blades.

A blade brake helps speed up the time between cuts.

At first glance, I thought this was a Ridgid version of last year’s new AEG cordless brushless miter saw. But it’s not. It’s a corded 10″ sliding miter saw.

The saw has been out for a couple of months now, and the user reviews on HomeDepot.com seem to be overwhelmingly positive.

I know what some of you are going to be asking. You’re going to say something along the lines of “who cares about a corded saw, why I can’t I buy the cordless miter saw right now!”

The Ridgid 18V 7-1/4″ miter saw, previewed here, and also posted about here when it was deeply discounted, has not been available. I’m told that it cannot be found in stores, and the online listing comes back with a “product not found” error message.

When I asked Ridgid about this, 7 weeks ago, I was told that the saw was temporarily out of stock. That still seems to be the case.

Maybe Ridgid is planning on a dual-battery 10″ sliding miter saw, like the AEG version that’s been out for a year. I can’t say.

But, let’s focus on this saw. If you’re in the market for a 10″ sliding miter saw, would this one fit the bill? What if this saw was converted into an 18V cordless model? Are there features you would want added? Anything changed?

Also, yes, I know that this saw has been on the market for a few months. Well, I know that now. But the press release just hit my inbox. I find myself both surprised and unsurprised that a new corded miter saw flew under my radar for so long.