ToolGuyd > DIY & Home > Raven MPV7100 Mower + Ridable Generator
If you buy something through our links, ToolGuyd might earn an affiliate commission. 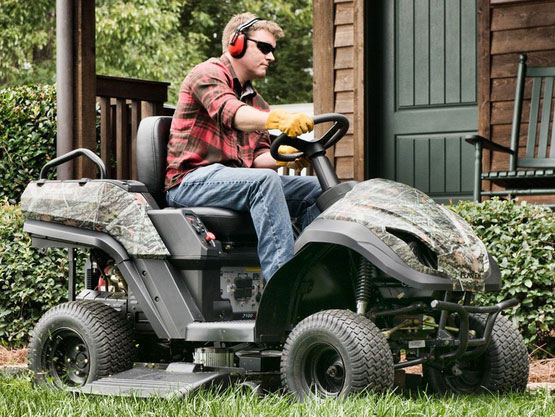 Last year’s Raven Hybrid Lawn Mower was immensely popular, but there were many complaints about the hybrid mower and generator, namely due to design or quality issues. After a few issues came to light, such as where the mower blades could detach during use or startup, and how fuel lines could leak, the Raven was eventually recalled.

The idea behind the Raven multi-purpose vehicle, which can function as a riding mower and as a gasoline-powered electric generator, is pretty compelling, and so the manufacturer has given it another go.

The Raven MPV7100-series hybrid mower features a removable 46-inch mowing deck, ATV-style front shocks and suspension, and a 7100 Watt electric generator. Its turning radius is 14-inches, and the ATV mower can reach speeds of up to 17 mph in gas or electric running modes. Loads of up to 550 pounds can be towed via the built-in trailer hitch.

The new Raven hybrid mower is made by Denver Global Products and is assembled in North Carolina.

As always, I am going to be brutally honest here.

Last year, the Raven brought an interesting concept to the table. A riding mower with removable mowing deck, ATV-like features, and a built-in electric generator sounds GREAT! And that’s what a lot of customers thought too. At ~$3000, the 2013 Raven hybrid mower wasn’t inexpensive, but it was reasonably priced for its feature set.

But, if you read the comments in our Raven hybrid mower preview, buyers encountered quality issues where bolts were coming off the mower. According to the CSPC recall notice, mower blades detached during use or startup without being activated, the vehicle could move forward unexpectedly, and some users experienced fuel leaks. These are not minor issues.

I would think that Raven would have ironed out all the issues that plagued the original MPV710, and that the MPV7100 hybrid ridable mowers are going to be problem-free.

The Raven MPV7100 looks like to be open for preorders, which is both good and bad. It’s bad for the company, as this means release will likely come after the peak mower buying season, but reassuring to customers as it suggests Raven didn’t rush this model to market.

I could not find any dealers or distributors of the Raven 7100, 7100B, or 7100S mowers. This could pose a problem for Raven, as it might mean they’re having trouble convincing retailers to carry the newer version of the hybrid ridable mower and generator.

To be frank, I think that Raven and Denver Global Products are bringing their A-game with the new Raven mower. Why? Because they have to. After what happened last year with the first Raven, the new Raven is going to be hard enough to sell to retailers and consumers alike.

If I was seriously interested in buying the MPV7100-series Raven mower, I would give the company a chance, but would make it a point to wait at least 6 months after initial release. This way, early adopters can report on any potential problems. Plus, after production and distribution are in gear, maybe Raven will make their accessory plans better known. A snow thrower attachment is at the top of users’ wishlists.