ToolGuyd > Power Tools > Saws > New Skilsaw Worm Drive Miter Saw
If you buy something through our links, ToolGuyd might earn an affiliate commission. 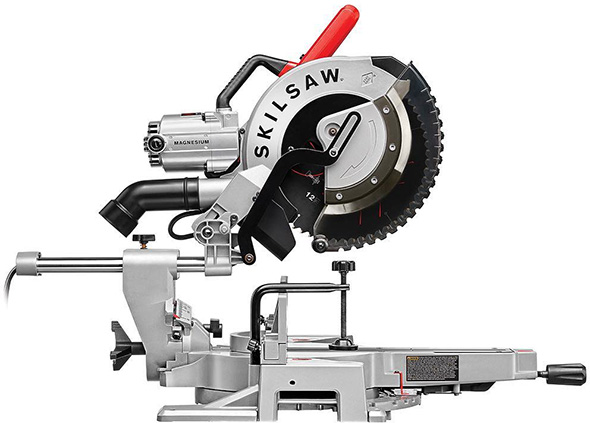 Skilsaw intends for their new worm drive miter saw to be used to cut trim and molding, and has said that their new saw is the “lightest in its class.”

A “dual field” motor is said to help keep the motor cool.

Other details and specs are not available yet.

To date, there are only two cordless 12″ miter saws, and they belong to Dewalt’s FlexVolt lineup, both being powered by (2) 60V Max FlexVolt battery packs. The corded 12″ sliding miter saw market, on the other hand, is a lot more competitive, and although there are new releases every so often, it takes a lot to be noticed alongside current market leaders.

Full details about the new Skilsaw worm drive miter saw are not yet available, but it looks like the main selling point is the lighter design, although they haven’t yet said how much lighter in weight it is than competing models.

From the materials I’ve seen, there also isn’t much about the benefits of the worm drive motor, aside from the cooler-running claims about the dual field aspect.

The LED shadow light cut line indicator is always a nice touch, and a feature I’d consider a must-have at least on more premium models.

Pricing and availability information isn’t out yet, nor is there any information regarding performance or total cut capacity.

In the 12″ sliding miter saw space, the Dewalt DWS780 ($599 via Amazon) seems to be the most popular premium corded model, especially during seasonal promos when it’s bundled with a free miter saw stand. I would expect to see the new Skilsaw 12″ sliding worm drive miter saw to be priced somewhere between $400 and $600.

Thank you to Steve for putting this on my radar!