ToolGuyd > Hand Tools > EDC, Pocket, & Multitools > Which Pocket Knife for Older Hands?
If you buy something through our links, ToolGuyd might earn an affiliate commission. 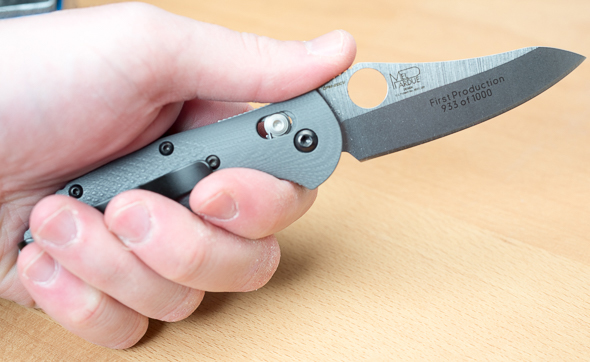 Paul wrote in with a tough question, asking about knives that are easier to open and close for persons with older or arthritic hands.

Hey Stuart, I’ve also asked Anthony, but I thought I’d check with you too. I’m looking to get a new knife for my Dad who’s carried the same nail nick 2″ish knife for the past 40 years. His thumbs are arthritic, he can’t open it so easy anymore. Hands fine, thumbs bad, but one figures hands will eventually go too.

He’s in Wisconsin so no laws to worry about. Needs a small EDC. Price isn’t an issue (I’m replacing a knife a man has carried for 40 years) but he isn’t gonna give a crap about steel quality. Used for random odd things, nothing specific. Ideas?

That’s a tough one. Some knives are easier to open and close than other, but I’m not quite sure which would be better for someone with reduced thumb strength or dexterity.

If going the fixed-blade route, Bradford’s Guardian 3 is a very good knife, and the 3.5 has the same blade but with a slightly larger handle. Bark River Knives has a couple of smaller fixed-blade knives as well. I also like ESEE.

For a folding knife, I think that liner lock and frame lock knives are out of the question, since closing them really depends on focused thumb motions.

I show the Benchmade mini Griptilian above, as it has a unique “Axis” lock that *might* be friendlier to older or stiffer hands.

Opening still requires thumb motion, but the thumb hole is a little more forgiving than a thumb stud, and one can use two hands if needed.

Closing the knife can be done with the pointer finger, or pointer and thumb. There’s not a lot of spring-back, and it’s the least-effort closing mechanism I’ve come across.

I was so surprised by this that I put together a quick video when I first bought the knife:

Lock-back knives are another option, but some can require a bit of effort to close.

The Spyderco Para 3 has a “compression lock,” and while it’s intuitive to close, and you can use a non-thumb finger, it’s not as effortless as with the Benchmade Axis lock.

Thus, my vote would be for a Benchmade mini Griptilian (they also have a larger size), at least as a first try. You can use your second hand to open the knife, if one-handed thumb opening is difficult or uncomfortable, and you can use your pointer or pointer and thumb to close the knife. If it’s difficult to release the Axis lock with the pointer finger, then the thumb can be used in a non-dominant capacity.

What would you guys recommend?