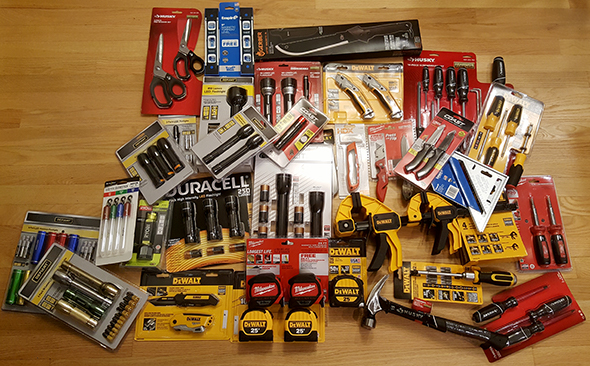 Do you think I went overboard?

The holiday season is officially here, with Home Depot having put up many of their holiday season tool deals on display. Some are clearly absent, such as a deal involving the new Dewalt Tough System wheeled tool box and value-priced small tool box.

I’ve got lots of posts about these and other deals on the way, and lots to say.

This is a good time to ask – are there any tool deals you’d like me to scout out in particular? Power tools? Cordless? Benchtop tools? Hand tools? Mechanics tools? Ratcheting wrenches? German-made screwdrivers or pliers? USA-made pocket knives? Etc. I come across too many deals to post about, so knowing what you’re interested in helps me prioritize where I look.

Anyway, back to the haul. I spent somewhere around $350 on all that.

Some of the tools I need for regular use, such as the Milwaukee premium tape measure double pack, Milwaukee FastBack knife and utility knife, the Dewalt trigger clamp 4-pack, the Milwaukee multi-bit screwdrivers, and the Empire levels.

One of the Dewalt tape measures, and the Dewalt ratcheting screwdriver, were picked up from the regular tool aisle, just because.

I went against my better judgement and bought several styles of LED flashlights from among several price and quality tiers. And a $2 HDX utility knife. Why? I’m extremely critical of these tools, and figured it’d time to give them another try, to see whether quality has improved or gotten even worse.

I also bought the 2-pack of Dewalt knives, the one that features the Tanto-style folding knife mentioned yesterday. I’m sure I’ve tried it in the past, only to not be impressed, but figured it’s worth a fresh look.

I found Ryobi LED flashlights on display, single packs, and assume that maybe the double packs will be a Black Friday special or something like that. But hey, this will let me know if it’s good enough to buy more.

Expect to see many of these tools discussed in upcoming posts, possibly video as well. This time of year my time and patience for bad tools runs thin, and so I tend to be a little coarser in my criticisms and stronger in my praise, especially if or when surprised.

As in the past, the Home Depot holiday deals gift center seems to be focused around Dewalt, Milwaukee, and Husky hand tools, and there’s a strong presence from Dewalt, Milwaukee, Ridgid, Ryobi, and Makita in the power tools and accessories area.

Surprising, some of these deals are appearing elsewhere too. For the first time, at least from what I can see, Amazon is carrying the same Dewalt trigger clamp deal (also at $30). In the past, it was only on Amazon from third party sellers who had been reselling what they bought at Home Depot.

And the lack of power tools or accessories in my haul isn’t a reflection on the quality of the cordless tool deals or bit sets. I’m simply good on everything right now, although I might buy some more bits or blades later in the season after I’ve scoped out what other retailers are offering.

Now, if you excuse me, I’m off to Lowes and maybe Sears to see what they’ve got. I spent more at Home Depot than I had in past years, and I hope I can say the same about Lowes and Sears, but I’ll be surprised if I spent $50 between the two stores.

P.S. Anyone need a flashlight? Rhetorical question, as I’m not spending $12 to ship a $5 or $10 light, but what am I doing to do with all these LED lights once I’m done testing them?!