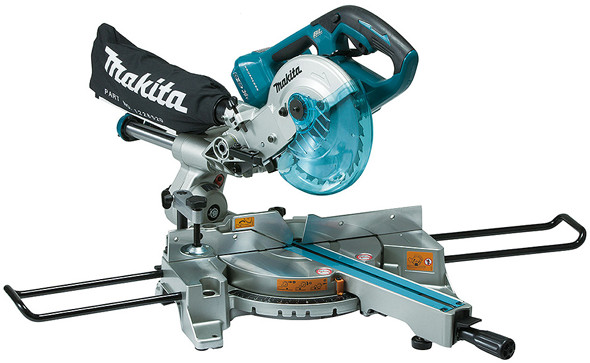 As I mentioned in the midst of other recent new Makita tool coverage, Makita is coming out with a new 18V X2 cordless miter saw. The new miter saw will join an 18V X2 circular saw, chain saw, rotary hammer, and several other dual-battery cordless power tools.

As you might recall, the X2 part means this is essentially a 36V saw that makes use of (2) 18V battery packs that are connected in series. Double the voltage means the machine has twice the available power compared to if it were designed to work with a single 18V battery pack.

The only other recent competition is Dewalt’s 20V Max cordless miter saw, which while excellent, is powered by a brushed motor. Dewalt has good reasons for not designing their new miter saw around a brushless motor – mainly how the brushed motor already provides good power and runtime – but it’s still nice to see Makita pulling out all the stops with their 18V X2 model.

Well, at least they pulled out most of the stops. Rather than stepping up the blade size to 10-inches, which is one of the two most common sizes in corded miter saws, they decided to stick with a 7-1/2″ size blade. That’s in the overseas DLS714 model, but Makita’s 18V cordless miter saw, which is available here, also features a 7-1/2″ blade size.

Makita says that the new 18V X2 cordless miter saw enables you to cut as fast as if you were using a corded slide compound miter saw.

Although initially wowed at Makita’s 18V X2 technology, I find single-battery tools to be much more appealing. Despite the Makita’s brushless and 36V-powered motor, I’d rather use Dewalt’s 18V cordless miter saw.

With two batteries, that means you need to invest in Makita’s dual battery charger ($128 via Amazon) or a second charger, or spend a little extra time babysitting your sole charger.

I have yet to test any of Makita’s 18V X2 cordless power tools, but it seems to me that you must use two matched battery packs. Otherwise, wouldn’t performance and runtime be limited to that of the smaller or weaker battery?

I don’t believe you could pair a 5.0Ah battery pack with a 2.0Ah battery and still see runtime benefits of the higher capacity battery. Maybe you would or could pair two dissimilar batteries together in a pinch.

If I were fully invested in Makita’s 18V system and had a bunch of same size battery packs lying around, I’d be more welcoming of this and other 18V X2 power tools.

I don’t quite understand why Makita went with a 7-1/2″ blade size with this saw, when the 36V brushless motor should be plenty powerful enough to work a 10″ blade.

I’m also annoyed that they went with a 7-1/2″ blade size. There is no shortage of 7-1/4″ circular saw blades to choose from, and there are far more 10″ saw blade options that are meant for general and specific cross-cutting applications. But 7-1/2″?? Makita’s other 7-1/2″ saw has a 5/8″ arbor, so you might be able to use a 7-1/4″ blade. You won’t see the same max capacity, and you’d be using a blade the saw isn’t designed for at your own risk.

There’s no word as to how much this saw will cost, but it’s not going to be cheap. Makita hasn’t specified any runtime specs, but I would expect for the saw to last through very many cuts.

The automatic speed control also looks to be a quite interesting feature. It shifts to high speed mode for light duty cutting applications, and then to low speed for heavy duty and higher torque cutting applications. Makita didn’t mention why this is a good feature, but I’m thinking that it should help prolong runtime even further.

Looking back at Makita’s 18V cordless miter saw, which came out more than 4 years ago, the new 18V X2 saw seems hardly different, at least on the outside. Going back and forth, the two saws look identical, except for the battery attachment part. I suppose that the X2’s motor casing is going to be a little bigger as well.

I suppose that tried and true might come into play here, but after seeing Dewalt’s spiffy new design, with its comfortable side handles, huge top handle, and weight-saving base, I wish Makita incorporated similar features.

Makita’s 18V miter saw is currently priced at $550. I wouldn’t expect for the 18V X2 saw to be priced lower, only higher. And that’s for the bare tool! A charger and the required batteries are sold separately.

2 x 2.0Ah batteries is $79 at Amazon, and 2 x 5.0Ah batteries is $219 there. Other battery sizes are priced between those extremes. Makita’s dual charger, at $128 via Amazon, is going to be the best charging option.

So, assuming the X2 is also released at $550 in the USA, you’re looking at buying-all-new cost of $757 to $897, depending on the size of batteries you wanted. Dewalt’s 20V Max cordless miter saw is $319 for the bare tool, or $399 for the 1-battery kit. Since this saw has a brushless motor, which typically costs more and requires pricier control electronics, I would not expect it to be sold at the same price as the brushed motor 18V model.

Now that this saw is out, at least overseas, hopefully Makita’s engineers will start working on a less expensive 18V cordless miter saw, or better yet – a brushless one.

What do you think? Is this a very welcome addition to Makita’s 18V and 18V X2 cordless power tool product lines?