ToolGuyd > Power Tools > Cordless > New Makita Cordless Drywall Sander XLS01 is a “World’s First”
If you buy something through our links, ToolGuyd might earn an affiliate commission. 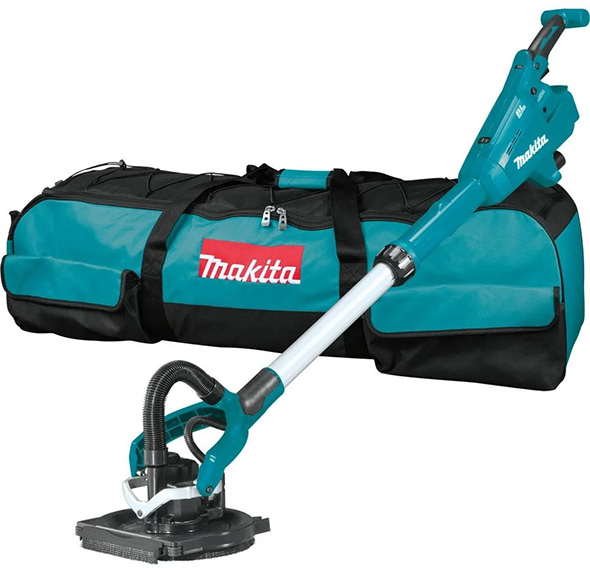 It’s a direct-drive sander, with the motor positioned behind the sanding head. The Makita XLS01 features a removable dust brush, gliding wheels, a swivel head, and constant speed control. A variable speed dial allows for speed adjustment from 1000 to 1800 RPM.

Runtime is said to be up to 35 minutes with a 5.0Ah battery and using 120 grit abrasive discs. 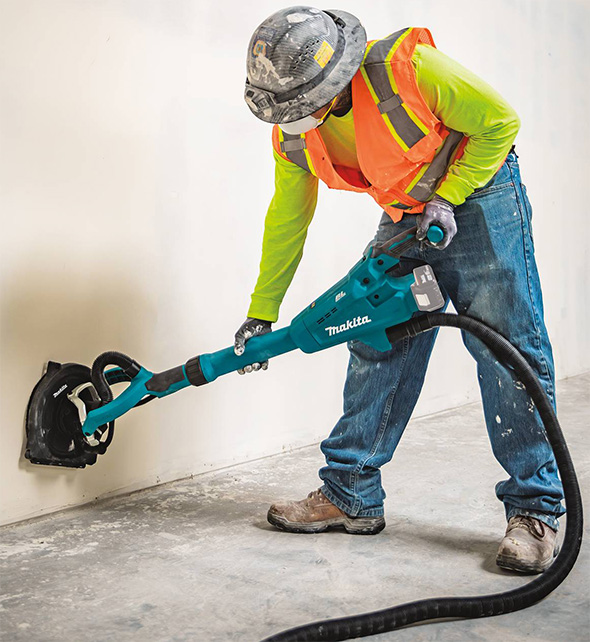 To take advantage of AWS functionality, you need an optional Bluetooth transmitter (198901-5, $75 via Amazon), and an AWS-equipped Makita dust extractor vacuum, such as the XCV08Z (tool-only, $509 via Amazon as of the time of this posting, not including 2x 18V batteries.) The AWS functionality allows compatible Makita cordless power tools to wirelessly activate compatible Makita vacuums.

After seeing Makita’s launch announcement on Instagram (I guess it’s not a big enough new tool for a press release?), Fred sent over a copy of Makita’s public newsletter (thank you Fred!), which describes the new Makita drywall sander as the world’s first cordless drywall sander. They advertise that users can increase productivity and mobility.

These tools are designed to work with dust collection. So while you’re not tethered by a power cord, there will usually be a vacuum hose to contend with.

When you pair a corded sander with a dust vac that has a sensing power outlet, the vac will turn on automatically with the tool. Makita’s AWS system replicates this functionality, but requires an AWS-capable tool (which this is), an AWS Bluetooth transmitter module (not included but available for ~$75), and an AWS-compatible vacuum.

I can see the benefits of having a cordless drywall sander. And, you don’t have to use Makita’s AWS vacuum system.

I’ve used Makita cordless power tools with a Festool CT dust extractor and their new Bluetooth remote. I can appreciate the solution that Makita came up with, but like the freedom of being able to use different vacuum systems. With Festool’s solution, you have to hit the remote to turn on the vac. It’s not as effortless as automatic activation, but it’s nowhere as clunky as having to reach over and turn the vac on and off.

If you want automatic activation, Makita offers it, but it’ll require buying an AWS-equipped Makita vacuum and an AWS Bluetooth transmitter module for the tool. For what it’s worth, I like that there’s only one SKU for the drywall sander. With the new Makita miter saws, you have to pay more for the AWS-capable model, and as per Makita USA’s product descriptions, that model doesn’t even come with the AWS module needed for wireless vacuum activation. With this new drywall sander, it’s AWS-capable, which means you only have to buy the transmitter if you want AWS activation.

I don’t know how I feel about the new sander, but then again I haven’t used a drywall sander before. In theory, losing a power cord is always nice. But for a tool that is almost always used with a vacuum or dust extractor

Festool has a [much pricier] Planex drywall sander (LHS 225/575219) that can be broken down, allowing it to fit in tight spaces and smaller tool boxes, but at the expense of greater weight compared to their single-piece sander. The new Makita XLS01 cordless drywall sander weighs a little more than that Festool Planex with one extension installed, and nearly 2 lbs more than Festool’s one-piece sander (LHS-E 225/571935).

I wonder if up to 35 minutes is sufficient runtime for a tool like this. But, I think Makita made the right call in making this an 18V tool rather than an 18V X2 tool, since as it is the new sander is around 2 lbs heavier than popular corded sanders.

At the time of this posting, I can’t find any Makita corded vacs with built-in AWS functionality, only cordless ones.

35 minutes might be enough to prep one room’s worth of drywall (right? wrong?), but is that enough for a job?

When moving around, you have the sander, which isn’t small regardless of brand, you have a hose attached to it, and you have a vac. Is having a cordless sander really that much better than a corded sander and corded vacuum combo where the tool is plugged into the vac and the vac into a wall outlet?

Makita has come out with some innovative cordless power tools before, such as their drywall cut-out saw. I’d like to think that their new cordless drywall sander is in response to user demands, and maybe it’s my lack of experience in this category that makes me wonder if it’s really better than a corded solution.

I’m a big fan of automatic-vacuum-activating power tool setups. In such configurations, a tool is connected to a vacuum so that dust can be captured as it’s created, and releasing the tool trigger or switch powers down the vacuum as well.

Which is the more appealing setup, a corded drywall sander with any compatible corded vacuum, or the new Makita cordless drywall sander (with optional AWS transmitter) paired with a cordless Makita AWS-compatible vacuum? How often is drywall sanding work done in an environment where AC electrical power is not available?

As mentioned, I can see the benefits of the Makita setup, but I find myself very strongly leaning towards thinking that a traditional corded tool setup might be better for most users. I should again mention that I don’t use this kind of tool to earn a living.

I find myself believing that the new Makita XLS01 cordless drywall sander almost requires that the user buy deeper into the AWS system. Of course you don’t have to, you can pair it with any properly-sized and featured vac, corded or cordless, but then you would have to manually operate any non-AWS vacuum. It’s been years since I’ve used an electric sander without automatic activation of my dust vac, except for when I’m testing cordless sanders in which case I still at least have remote activation at the end of the hose, and it’s not something I can easily give up. So, that’s why I keep focusing on the AWS and automatic vacuum activation aspect of the sander. This gives me somewhat of an “all or nothing” mentality.

If you use drywall sanders regularly, what’s your take on the new Makita? Could it replace your current sander?