ToolGuyd > Hand Tools > EDC, Pocket, & Multitools > Leatherman Skeletool Multi-Tool Review – a Minimalist but Very Handy EDC Companion
If you buy something through our links, ToolGuyd might earn an affiliate commission. 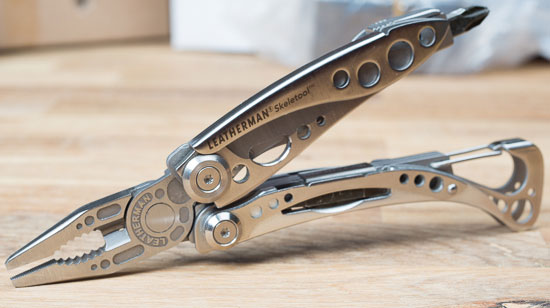 It has been nearly 2 years since I reviewed the Leatherman Skeletool CX multi-tool, and almost 7 years since I’ve owned it. I have owned the non-CX version of the Skeletool for even longer, and now felt like a good time to revisit the compact and slim Skeletool form factor with another review.

I purchased this multi-tool way back in March of 2008, a couple of months before the CX. Since then, it has seen a good amount of use, but I tend to only carry it when I need a more minimalist option. And since I own the Leatherman Skeletool CX as well, sometimes I carry that one.

The Leatherman Skeletool stays true to its name. It is lightweight, compact, and equipped with only the tools you might need most often. Much work must have been done to increase the Skeletool’s visible appeal while also shedding excess weight.

I thought that the various holes and grooves would become lint and gunk collectors, but that has yet to happen.

It feels wrong of me to say this, especially so early in the review, but the Skeletool is one stylish multi-tool. Sure, it’s highly functional, but it was the looks that initially held my attention.

Aside from the chipped tip, the Skeletool’s knife blade has performed well.

After I contacted Leatherman and asked if they could just replace the blade if I disassembled the tool and sent the blade in, they offered to replace or repair the tool under warranty.

This is what Leatherman said:

We’re sorry to hear about your issues with our product, but don’t worry because we have a 25-year warranty on all of our multi tools and knives and a 10-year warranty on all lights. We do not send out blades, and if you are worried about your knife being exchange, just make sure you state in the your submission form that you want your tool repaired not replaced and high lighted it.

I never got around with taking them up on that offer. That’s okay, there’s another 18 years left on my warranty in case I change my mind.

One thing to point out is that Leatherman’s response was not a boilerplate – it looks to be an actual personal response, which always impresses me about a company.

The Skeletool knife blade opens easily, closes easily, and locks up securely. It could use a quick honing or sharpening right now, but other than that it’s in great condition. Keep in mind that this is a ~7-year old knife that’s seen a good amount of use.

In the years since I bought this Leatherman Skeletool, I have bought many more multi-tools, many folding pocket knives, and a couple of fixed blade knives. 420HC is a “lesser” steel in comparison to the premium steel alloys used in many of the knives and multi-tools now in my EDC collection and rotation.

While I know that 420HC is a lesser steel, it’s still a very good performer. I can’t show you many better multi-tool or pocket folding knives for less than what the Skeletool costs.

I would rather use a nicely shaped, well-ground, and carefully treated 420HC knife blade, over one with better steel and a lousier shape and finishing. 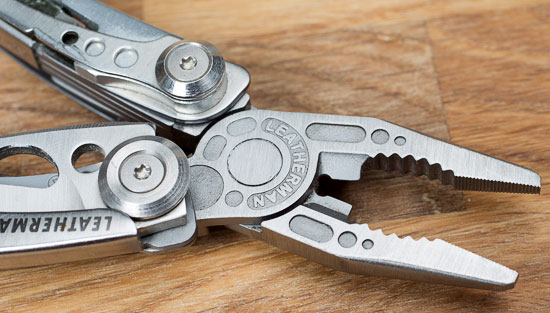 Not only that, they’re also slim enough to fit into tight spaces where other multi-tool pliers might not go. Although smaller, the Skeletool’s pliers are just as functional as on full-sized multi-tools. And sometimes, they’re even better. 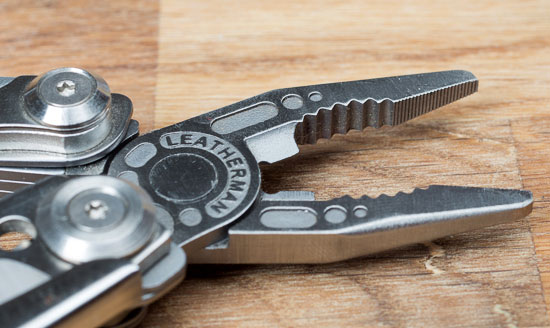 The pliers have fine grooves at the tip, and wider-spaces grooves at the mid-section. Both gripping zones work great for holding onto a wide range of material sizes and types. You also get two-zone wire cutters with shear-action cutting blades and a notched section for cutting harder wires.

I believe that this is the only Leatherman multi-tool, aside from the Skeletook CX of course, to have decorative features machined into the pliers. This creates a 2-tone contrast between the polished surface and machined pockets. It adds some nice styling and works well with the skeletonizing holes found all over the rest of the multi-tool. 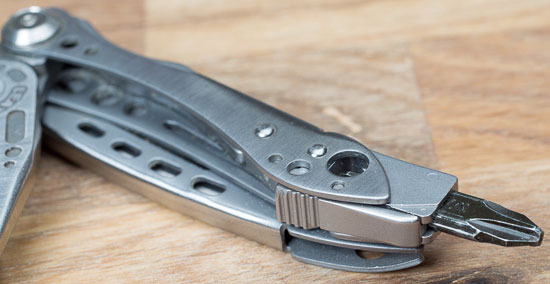 You get a similar bit driver as featured on the Wave, but this one has an active lock instead of a passive one. The locking bit holder fits Leatherman’s special super-shaved-down double-ended hex screwdriver bits. They are notched in the middle, allowing them to be actively locked in place by the spring-action bit lock. To remove a bit for swapping or reversing, squeeze the grooved part of the lock and pull the bit.

One of the included bits has Phillips tips (#1, #2), and the other has slotted tips (3/16″, 1/4″). One bit is stored in the bit holder, the other slides into a special place in the carabiner side of the handle. Both are fully interchangeable.

As with most – if not all – Leatherman multi-tools, the Skeletool is largely made of stainless steel.

It is very solidly built. The only issue I’ve experienced was when I chipped the tip of my Skeletool’s knife blade, but that was probably my fault. I don’t remember how exactly it happened, but I have the faint memory that it was something I did. Maybe that’s partly why I haven’t sent it back to Leatherman to repair yet. It’s also very, very minor and doesn’t affect the use of the blade for cutting or even most piercing tasks.

I keep waiting for something to break, so that I can better justify sending it back to Leatherman for repair, but the darned thing fails to disappoint me!

There is also a strip of aluminum that serves as a spacer on the carabiner side of the handle. This gives the tool added strength and rigidity, but without the extra weight of solid steel. On the Skeletool CX, this spacer is made from carbon fiber instead. 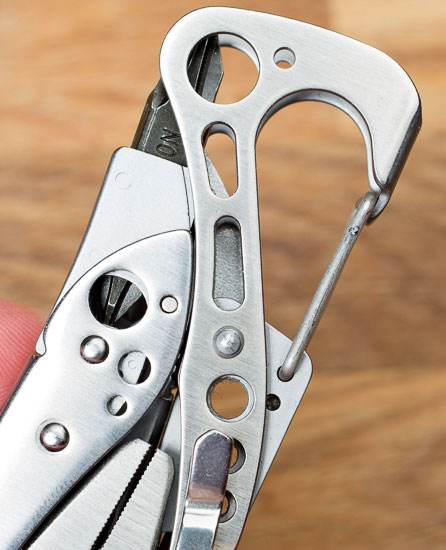 The Skeletool doesn’t come with a sheath, as it is intended for compact and lightweight carry. You could always get a separate sheath – maybe a Skinth sheath? – if you want to carry the Skeletool on your belt.

The Skeletool is about as compact as everyday multi-tools come. The Leatherman Freestyle is a little smaller, but a lot less functional, if you ask me. The Freestyle takes the minimalist route further, and nixes the carabiner clip and bit holder screwdriver.

Leatherman’s Juice multi-tools are also more compact, at least the less-featured and smaller ones, but they’re not really in the same league as the Skeletool.

The Leatherman Rebar, which I reviewed and also adore, is another compact multi-tool, but all of its features are only inside-accessible. The Skeletool’s one-handed outside-opening knife and lighter weight are strong advantages, if you desire these things.

Although the Skeletool is a minimalist multi-tool, it packs enough tools and features to make it a good choice for everyday carry and use. It is incredibly pocketable, which is important when it comes to multi-tools.

Who cares how many tools, features, and functions a multi-tool has if it’s too big, bulky, or heavy to take with you and have available when you need it?

Opening, accessing, and closing any of the tools is a snap. Sometimes literally. I find the sound of the tool snapping closed to be oddly satisfying.

I have never had any comfort issues with my Skeletool, but it’s worth pointing out that the handles are directional. When the handles are opened for pliers use, one side is rounded outwards, the other is rounded inwards. This means that one side is more comfortable pressed against your palm, and the other held against your fingers. This isn’t a complaint, just an observation.

There aren’t any pinch points that I’ve noticed, at least for right-handed users. But left-handed users will want to watch out for the area near the pivot, where the back of the knife blade meets the opposite handle. Righties who flip the multi-tool so that the outwards-rounded handle fits their fingers and inwards-curved one fits their palm will also have to watch out for this.

The CX is a stronger choice if you like the styling better, prefer the more premium 154CM knife blade alloy, or prefer a plain edge blade profile vs. the partially serrated edge the new non-CX Skeletools feature.

These Leatherman tools are backed by a superb 25-year warranty.

I have owned my Skeletool for over 7 years now. These days it doesn’t see as much use as some of my full-sized tools, but it’s still among my favorite multi-tools to carry. More often, I pack it into a photo or travel bag. It takes up little space wherever it’s stowed.

If I lost all of my multi-tools, the Skeletool CX would be my first re-purchase. Maybe this version of the Skeletool? Sometimes I flip-flop about which knife blade style I prefer, regarding plain vs. partially serrated. The CX knife blade is also made from a more premium steel, although for the money I’ve never found the Skeletool blade to be lacking.

The Skeletool has all of the tools I might need on a daily basis – a knife blade that I can access with one hand without opening the entire tool, versatile pliers that can tackle common everyday tasks, a removable bit screwdriver that can be enhanced with optional accessories, and a bottle opener.

It’s a fantastic tool – one that I love carrying and using, and one that I know most of you will too.